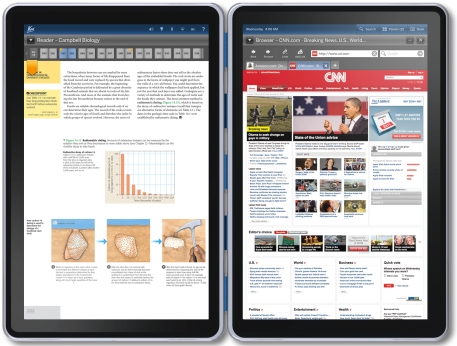 Is there a future for tablets in the education market? Probably. As text input devices, tablets can store a lot more paper than a paper notepad. And tablets make excellent eBook readers — which is great if you’d rather carry around one device with a dozen books than a dozen heavy books in your backpack. As an added bonus, tablets can run other software, including calculators, web browsers video players.

That said… I’m a bit skeptical of the Kno dual screen tablet from Kakai. When we first started hearing rumors about this device aimed at the education market, I assumed it would be a thin and light device sort of like the enTourage eDGe, or the ill-fated Microsoft Courier. But the device that Kakai officially launched today is a whole different beast: A 5.5 pound tablet with two 14 inch IPS LCD displays.

To be fair, textbooks can be big and heavy, and anything that can take a few books out of your bag might be worth its weight in… weight.

The Kno tablet has a low power NVIDIA Tegra chipset which the company says should provide 6 to 8 hours of run time. The device runs a custom version of Linux and the company says it should be able to work with Microsoft Office documents.