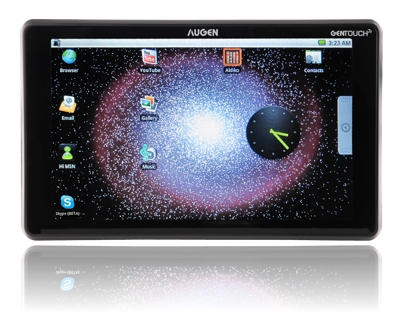 Cheap Android tablets are officially starting to show up in the US. While we’re still waiting for higher end devices like the Dell Streak to go on sale, dirt cheap tablets running Google Android have been hitting the streets in China and other Asian countries for the past few months. Some of these cheap tablets are even available in the US thanks to companies that import goods from overseas. But now it looks like you may not even have to resort to ordering from obscure retailers to get your budget Android fix. Because Kmart is selling an Android tablet for $149.99.

The tablet in question is the Augen GenTouch 7 inch tablet. According to the company web site, it features an 800 x 480 pixel display, an 800MHz CPU, 256MB of RAM, 2GB of storage and WiFi, as well as an SD card slot. The tablet runs Google Android 2.1.

For $150, I wouldn’t bank on this tablet coming with top notch support, software updates, or other features you’d expect from a name brand device. But for $150, who cares?

Out of the box, this tablet probably won’t be able to access the Google Android Market, but you should be able to copy APK installer files to the tablet using a USB cable to install third party apps. And I wouldn’t be surprised if the Android hacking community eventually came up with an unofficial way to add Android Market support. (Yes, I know the Augen web site says you can install over 70,000 apps with just the click of a button, but I’d be shocked if this thing has Android Market access. Someone buy one and prove me wrong).

Update: While the Augen Android tablet appears to be in short supply at KMart retail locations at the moment, it looks like many folks are spotting a $99 Android powered netbook from Augen.

Update 2: Well, there does seem to be some evidence that the Android Market comes preloaded, although it doesn’t actually work yet.