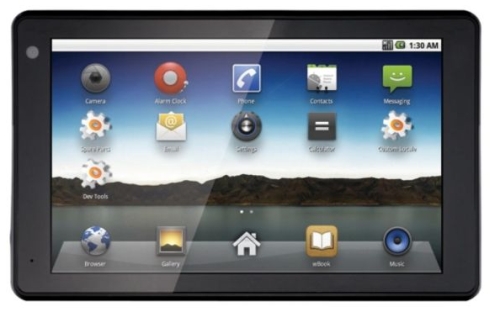 It looks like the Augen GenTouch78 Android tablet was just the first inexpensive Android tablet offered by KMart. Today we learned it’s not the last, because the retailer is now selling the Sylvania 7″ MID Tablet Wireless Mobile Internet Device.

Aside from a catchy name, here’s what the tablet has to offer:

There’s no word on what kind of touchscreen the computer has, whether it comes with the Android Market or not, or if it has a G-sensor for automatic screen rotation. I wouldn’t place bets on any of those features, but the specs don’t appear to tell the whole story — the photo shows what appears to be a camera on the front of the tablet, but the product description doesn’t mention a camera. It’s also not clear where the Android buttons (home, back, menu, and/or search) are hiding.

KMart is also continuing to offer the Augen GenTouch78 as well as several other Android tablets from ViewSonic, Velocity Cruz, and others.