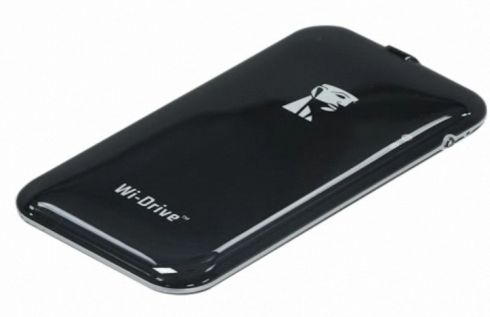 Sure, Google is adding support for USB peripherals to Android 3.1, which means that you may eventually be able to carry around your complete movie collection on a USB hard drive and plug it in when you need it. But what about the iPad? There’s no USB host support on that tablet.

Seagate recently introduced the GoFlex Satellite portable hard drive which connects to an iPad over a WiFi connection. Now Kingston is showing off a similar solution called the Wi-Drive.

The Kingston Wi-Drive uses flash-based storage and doesn’t offer nearly as much storage space as the 500GB Seagate drive. But with a starting price of $130 for a 16GB model, the Kingston solution is considerably cheaper than the $200 Seagate GoFlex Satellite. A 32GB Kingston Wi-Drive might be a tougher sell at $175.

The Wi-Drive can stream 720p HD video to up to three devices at the same time.

At launch Kingston will offer an iOS app which lets you stream media to an iPhone or iPad. Eventually an Android version will be available as well.