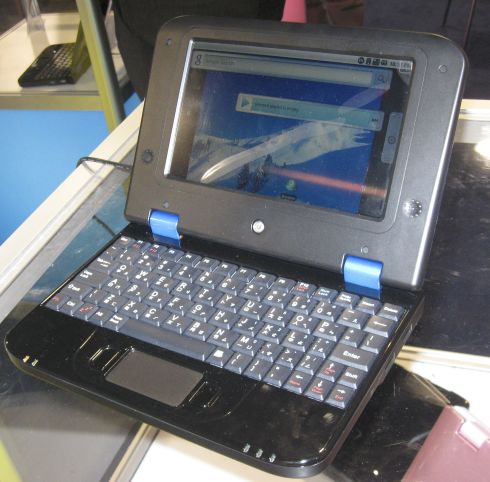 Over the past 2 years, I’ve seen a lot of 7 inch mini-notebooks with ARM or MIPS based processors. Most run Windows CE or some flavor of Linux. This week I came across a model running Google Android, which is the first time I’ve seen that OS on one of these generic netbooks. I’m sure it won’t be the last.

This particular model is the GL-750 from Taiwanese PC maker King Yung Electronics. It features a 7 inch, 800 x 480 pixel display, a 533MHz Feescale iMX31 ARM11-based CPU, 128MB of RAM, and 1GB to 16GB of flash storage. The netbook can also run Windows CE or a light weight Linux distro built on the 2.6.x kernel.

The company doesn’t have a US distributor for the GL-750 yet, and the demo model had an international keyboard. Android felt pretty responsive on the unit, although it did take a while to load Liliputing in the web browser, although I can’t say for certain whether that was because of the hardware or the weak WiFi signal on the convention floor.

King Yung was also showing off a 10 inch convertible tablet-style netbook with an Intel Atom processor and Windows XP. I was moderately impressed with its design until I realized that it appears to be exactly the same computer that Haier and PDC were showing at CES last week.