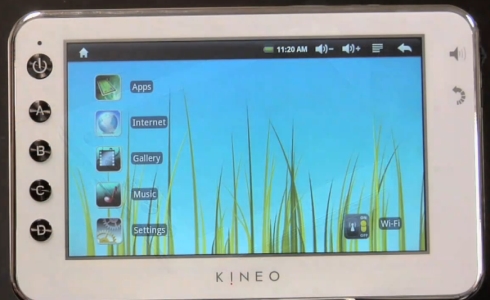 With Android tablets expected to flood the market this year, it’s nice to see that some companies are looking for ways to distinguish their products. The folks at Brainchild have designed a tablet that’s aimed specifically students and children.

The Kineo tablet might not have the most impressive specs, but it packs security features which schools can use to limit students’ access to unapproved web sites, books or other digital content. The company also offers software for synchronizing data on the tablet with a computer. Perhaps most importantly, the tablet has a rugged case design so it can take a bit of a beating from little hands.

The tablet features HDMI output, a headphone jack, USB port, and SD card slot for expansion.It has a number of buttons on the side of the tablet for answering multiple choice questions (although I’m not really sure why you need those buttons in addition to the touchscreen). The device also appears to accept stylus input which seems to suggest a resistive touchscreen — although the web site doesn’t make it clear what kind of touchscreen technology Brainchild is using.