Amazon has been offering third-party apps and games for its Kindle eReaders for years… and I’m not talking about tablet apps for the Kindle Fire.

There are a few hundred games and apps available for the Kindle, Kindle Paperwhite, Kindle Keyboard, and other eReaders with E Ink screens.

But you can’t run any of them on the new Kindle Voyage. 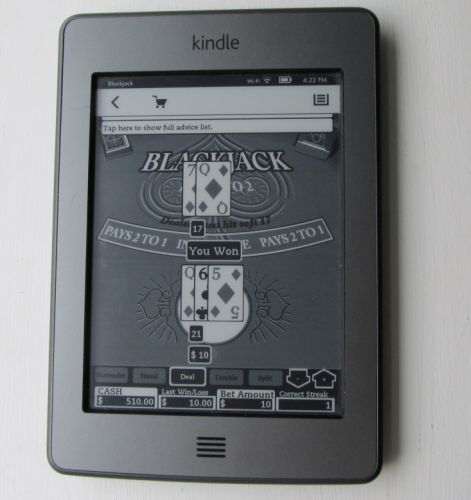 A member of the MobileRead forum noticed it was impossible to download any previously purchased Kindle Active Content apps on the Kindle Voyage, and Nate from The Digital Reader reached out to Amazon for an explanation. He got it: the Voyage doesn’t support these third-party apps and it never will.

Amazon isn’t pulling the plug on Active Content altogether… you can still download and install Scrabble, Solitaire, BlackJack, NotePad Plus, and other apps on other Kindle eReaders including the most recent Kindle Paperwhite and entry-level Kindle models.

But Amazon isn’t really promoting the platform and is instead focused on developing the Amazon Appstore for Fire tablets (and other Android phones and tablets).

So if you’ve been using your Kindle to play games for years and you don’t want to lose the ability, you might want to hold off on updating to Amazon’s new top tier eReader. I suspect there aren’t all that many people who fall into that camp.

This isn’t the first time Amazon has launched a new Kindle that lacks a feature that was available in older models. Older models used to include headphone jacks and support for text-to-speech. But Amazon stopped offering those features with the introduction of the first Kindle Paperwhite in 2012.