Amazon offers its Kindle eReaders for as little as $79. But in order to get a Kindle at that rock bottom price you have to put up with advertisements as your screen saver. An ad-free version costs $30 more.

Up until now the only Kindle with Special Offers models have been the E Ink Kindle and Kindle Touch. But now it looks like Amazon could be preparing to bring ads to the home screen of the Kindle Fire 7 inch Android tablet. 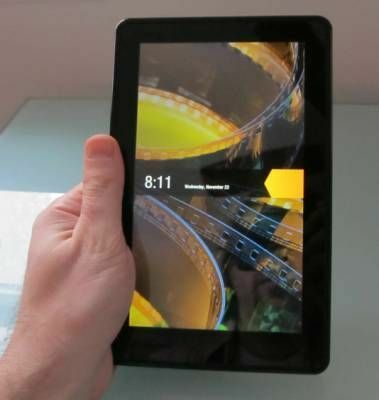 AdAge reports that Amazon is courting advertisers, asking for $600,000 or more for ad campaigns that would run for two months.

Amazon hasn’t commented, and AdAge suggests it hasn’t yet been decided whether the program would run on the current crop of Kindle Fire devices or on an upcoming tablet. My guess is the latter — Amazon could subsidize the cost of Kindle Fire tablets and sell them for a discount to customers willing to put up with ads.

But there’s technically nothing that would prevent Amazon from rolling out the feature to existing tablets in a future software update.

I have a Kindle Touch with Special Offers that I picked up for $99, and honestly I don’t mind the ads that much. They only display on the home screen and the screen saver, so they’re unobtrusive when I’m reading a book. And I’ve actually found one or two coupons worth using — usually for products purchased from Amazon itself.

But I do appreciate the fact that Amazon offers an option that would let me disable the ads by paying $30. Hopefully the same option would be available for a Kindle Fire with Special Offers.

One reply on “Kindle Fire with Special Offers (lock screen ads) on the way?”