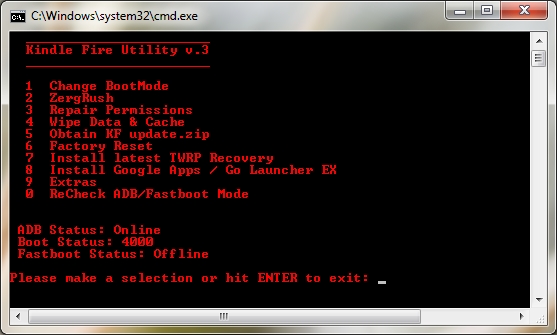 It’s been a little over a month since the Amazon Kindle Fire hit the streets, and since day one hackers have been kicking the tires of Amazon’s 7 inch tablet to figure out how to make it do more than read books, play videos, and run apps purchased from Amazon. Now a developer going by the name of Vashypooh has put some of the best tweaks in one place.

Basically all you have to do is connect your Kindle Fire to a Windows computer with a USB cable, download the Kindle Fire Utility zip file, unzip it to a folder on your computer and start the run.bat file to get started.

Here are some of the nifty things you can do with Kindle Fire Utility:

The utility will walk you through the rest, even displaying helpful comments to explain what’s happening as your tablet reboots during the process.

Team Win Recovery Project 2.0 is a custom recovery utility that makes it easy to create a complete backup or your Android device, restore from a backup, or install new firmware or updates. 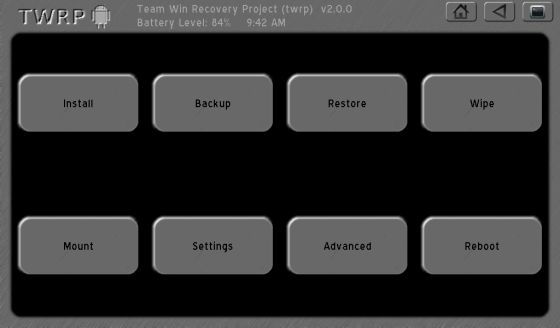 You can install TWRP 2.0 manually — or fire up the Kindle Fire Utility and choose the option to install the latest updated automatically.

If you want to install the Android Market and other Google apps on an Amazon Kindle Fire running Amazon’s standard software but don’t want to go through the hassle of doing it all manually, Kindle Fire Utility lets you install the official Google Apps package including the Android Market as well as a home screen launcher called GO Launcher EX which you can use instead of the Kindle bookshelf-style launcher.

You can use Kindle Fire Utility option 5 to download the latest version of the official Amazon software for your tablet.

If you’re already running Amazon’s software this might not seem that exciting, since Amazon pushes updates automatically over WiFi. But if you’ve installed CyanogenMod or another operating system on the tablet, you can use Kindle Fire Utility to quickly download the latest official version of Amazon’s software.

Once you’ve done that, you’ll still need to manually restore your device using the update.zip. You can do this using TWRP 2.0, or you can restore the Kindle Fire using JackpotClavin’s original method. You can find more details in the “restoring your Kindle Fire” section of our tutorial for installing CyanogenMod 7 on the Kindle Fire.

Recover from a boot error

If your Kindle Fire is stuck in a boot loop or won’t turn on for some other reason (especially after you’ve been trying to do something like flashing a custom recovery, bootloader, or other firmware) you may be able to use Kindle Fire Utility to recover.

When you run the program the first time it will show you the boot status. If it shows anything other than 4000, choose option 1 to change the bootmode and then select “Normal.” If all goes according to plan, this should cause your device to reboot normally.

The Kindle Fire Utility comes with all the drivers and tools you should need, and the utility makes it easy to make some rather complicated changes to the tablet without manually entering a series of commands in a DOS box.

But you’ll probably have the most success if you have at least a basic knowledge of some Android development tools including adb and fastboot. While this utility makes things a little easier and safer, there’s still a good chance that something can go wrong. You will probably void your warranty by performing any of the actions described in this post.

You may also have to manually install drivers for your computer to recognize the Kindle Fire in adb and fastboot mode. To enable ADB for the Kindle Fire, you can follow the steps in our guide for rooting the Kindle Fire.

If your computer doesn’t recognize the tablet in fastboot mode, you can install the drivers included in the drivers folder of the Kindle Fire Utility. Just open your device manager, find the Kindle (which will probably have an exclamation point next to it), choose the option to update drivers manually, and browse to the drivers folder.

You’ll know that you’re stuck in fastboot mode without the proper drivers installed if your Kindle Fire isn’t booting properly after entering fastboot mode (for instance, to install TWRP) and the Kindle Fire Utility is stuck on a screen that says “waiting for device.”