Now some early Kindle Fire HD users have figured out how to install an alternate home screen launcher app and get Google Talk up and running without rooting your tablet (and potentially messing up the operating system). 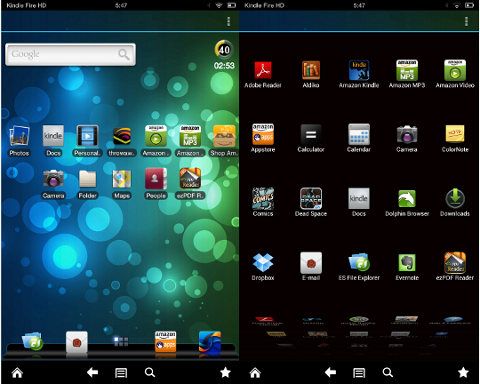 The Kindle Fire HD runs Android 4.0.3 — but you’d never know that by looking at the home screen or app launcher. There’s no room for widgets, no dock at the bottom, and a carousel showing large icons for recent apps.

But it is possible to replace the Kindle Fire HD launcher with a standard Android launcher… as long as you can find one that works. So far it looks like many popular options such as Nova Launcher, Apex Launcher, Go Launcher, and Zeam do not work.

But the eBook Reader reports that ADW Launcher EX does work. Unfortunately there are a few problems.

First, it’s a paid app — and you’ll have to figure out a way to get the installer file onto your Kindle Fire. The simplest method is probably to buy the app on another Android phone or tablet, backup the APK using Titanium Backup (if you have root access), and then manually copy it. OK… maybe that’s the simplest way if you already have another Android device that’s rooted…

Anyway, the other problem is that while ADW Launcher EX lets you customize your home screen with a dock, widgets, and just the icons you want, it won’t actually replace the Kindle’s default home screen. Pressing the home button will always take you back to Amazon’s home screen.

You can tap the ADW Launcher EX icon any time you want to switch to that home screen though — so if that’s really important to you, I guess that’s something.

The good news is that you don’t need to root your Kindle Fire HD to install the launcher.

We already knew that you could install Google Maps, YouTube, Gmail, and Currents on the Kindle Fire HD without root access. But it looks like you can also install Google Talk. It just takes a little more work.

That’s because in order to get Google Talk up and running you also need to install the GoogleServicesFramework utility.

Xda-developers member alkemist80 has posted download links for both. The GoogleLoginServices.apk is also included, and may come in handy.

Google Talk may log you out when the tablet goes to sleep, but as long as you log back in manually, you should be able to chat away using Amazon’s $199 tablet, no root required.