If you use the HDMI port to plug the Kimdecent Mk806 into an HDTV, you can just listen to audio on the televison’s speakers. But if you want to hook it up to a monitor or other display that doesn’t have speakers, you can plug in a pair of headphones or external speakers. 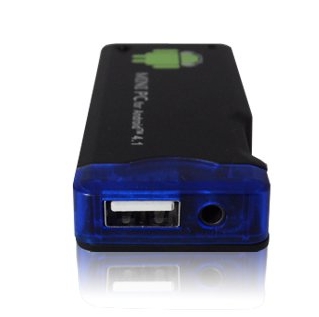 In addition to the audio jack, the MK806 has a full-sized HDMI port. Most of its peers have mini HDMI ports.

The rest of the specs are pretty much par for the course these days, including:

The Rockchip processor means that this little PC will probably be faster than the MK802 (which has an Allwinner A10 ARM Cortex-A8 CPU). But it also means that the MK806 probably won’t support Linux anytime soon. Rockchip hasn’t been as forthcoming with support for open source developers as Allwinner.

If you’re just looking for a cheap device that lets you play Android games, surf the web, or perform other activities on a TV or monitor though, the MK806 is one of the only cheap options available with a headphone jack.