Chinese device maker Kimdecent has introduced a new mini PC called the Droid Stick T4. Like an MK802, the Droid Stick T4 looks like a USB flash drive, but it’s really a little computer featuring an Allwinner A10 ARM Cortex-A8 processor and 4GB of storage.

But Kimdecent’s new model ships with 1GB of RAM instead of 512MB, features an HDMI adapter that lets you plug the stick right into a TV or monitor without any cables, and features a microphone jack.

The Droid Stick T4 is available from AliExpress for $69. 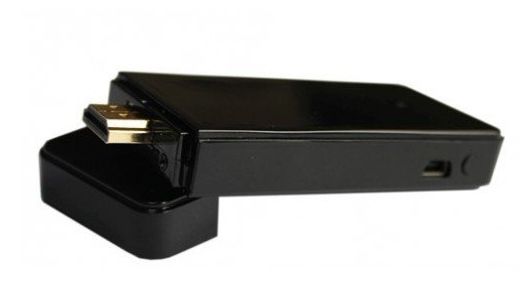 Kimdecent says the Droid Stick T4 also supports USB cameras and 3G dongles. You can also plug in a USB mouse or keyboard, or even a USB hub which should allow you to connect multiple devices at once

While the mini PC comes with Android 4.0, like other devices with Allwinner A10 chips, it should be able to run Ubuntu or other desktop Linux distributions optimized for ARM processors.

The device is designed as a companion for a TV, allowing you to surf the web, stream video, or play games on a big screen. But for all intents and purposes, it’s a cheap desktop computer which just happens to ship with Android as its default operating system. It also includes a working Google Play Store, which makes downloading and installing most Android apps pretty easy.

It features a microSD card slot, a full-sized USB 2.0 port, a mini USB port, and a full-sized HDMI connector.