Its maker says the system supports 4K video playback at up to 60 frames per second, making the little computer a reasonable option for building a small, quiet home theater computer.

And unlike a Raspberry Pi, the Khadas VIM3L has 16GB of built-in storage and comes with android 9 Pie pre-installed, so you don’t necessarily need to supply your own storage or operating system (although you can if you’d like).

The Khadas VIM3L is up for pre-order for $50 and up and the board is expected to start shipping at the end of October. 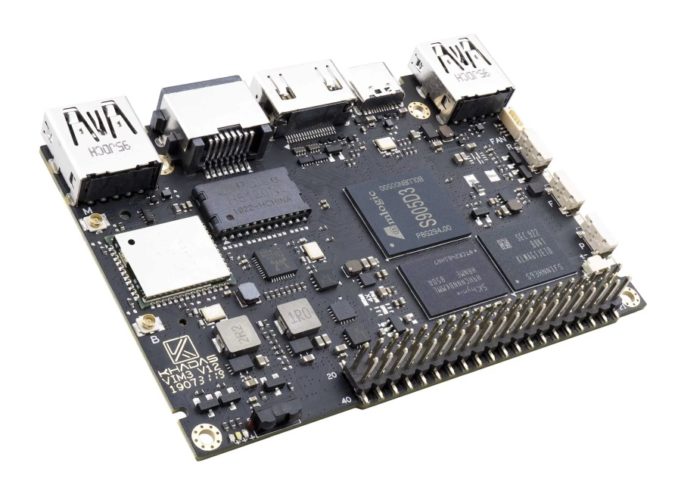 If you’re wondering about the “and up” part of the price, here’s the deal. Pre-order by September 16th and you can snag the board for $50. Or you can pay $70 for an HTPC Kit bundle that includes a VIM3L, a transparent case, a metal plate, an IR remote control, and CoreELEC installed (rather than Android).

After that the price goes up by another $5, so the normal retail prices will be $60 and $80, respectively.

The Khadas VIM3L’s other specs include 2GB of RAM, Gigabit Ethernet, HDMI, USB 3.0, USB 2.0, and USB-C ports, plus 802.11ac WiFi, Bluetooth 5.0, a 40-pin header, GPIO expander, power, function, and reset buttons, and two external antenna’s that you can screw onto the board.

There’s also a PCIe (1-lane) connector on the bottom of the board, as well as MIPI-CSI and MIPI-DSI connectors for adding an optional display or camera. There’s also an optional M2X Extension board that adds 4G LTE, SSD, and Power over Ethernet support.