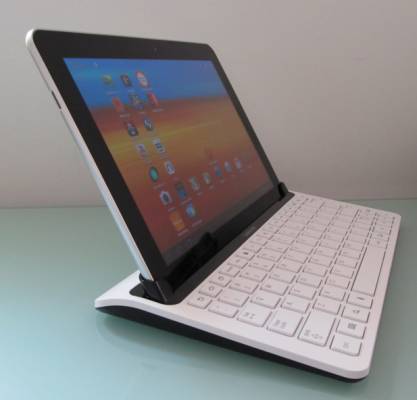 Samsung offers a $70 keyboard dock accessory for the Samsung Galaxy Tab 10.1 tablet. It’s designed to make text entry much, much easier than it would be if you relied solely on the on-screen keyboard. But it also has a few other nice features including shortcuts for all sorts of Android functions, a headphone jack, and a port which lets you charge the tablet while docked or connect to a computer to transfer files.

The Samsung keyboard dock isn’t as impressive as the $150 dock Asus offers for the Eee Pad Transformer. It doesn’t have a separate battery to double your device’s battery life. It also doesn’t snap onto the front of the tablet to act as a lid. But it’s much nicer than some of the Bluetooth keyboards I’ve seen since the dock forms a tight connection with the tablet letting you place the device on a table, desk, lap, or even hold it in your hands while you type without fear of the tablet falling free.

The plastic keyboard has a nice sturdy feel and I didn’t detect any flex in the keys. It’s a bit on the heavy side, at 1.5 pounds. That’s heavier than the 1.5 tablet itself — but that probably helps to keep the tablet from tipping over when docked. The keyboard draws power from the tablet, so there’s no need for extra batteries.

Samsung loaned me a demo unit of the keyboard to test, and so far I’ve found a lot of things to like about the accessory, but it also has a few quirks.

The keys are flat and well spaced. Overall the layout reminds me of a good netbook keyboard. The difference is that the Samsung Galaxy Tab 10.1 keyboard dock has a number of special function keys designed specifically for Android. 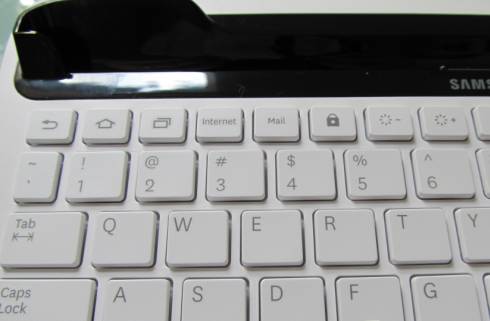 The top row of keys features back, home, and recent apps buttons as well as internet and mail shortcuts, a lock screen button, brightness and volume controls, and media playback controls. 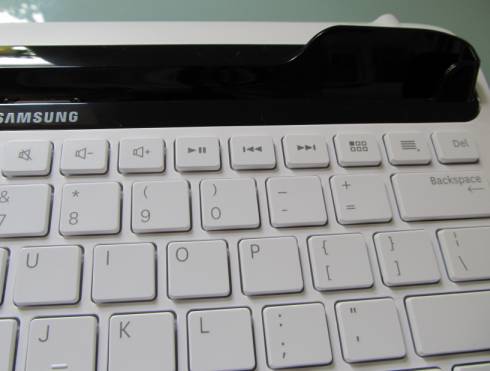 Near the far right side there’s an icon for launching the Android app launcher and a menu button for bringing up settings from within an application. 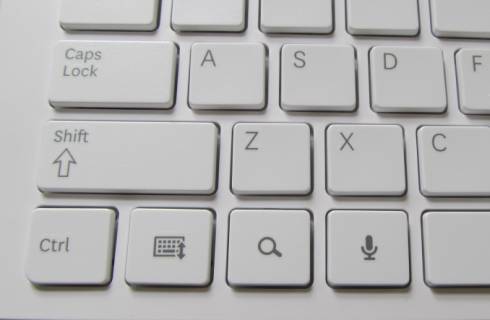 On the bottom of the keyboard you’ll find search and voice input buttons, an icon for bringing up the quick settings menu, and on the left and right side there are buttons for making the on-screen keyboard appear or disappear. 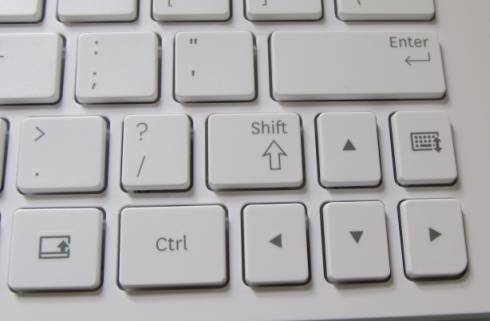 There are also arrow keys which can also function as Page Up, Page Down, Home and End keys when you hold the Ctrl button and press them. These are keys I’ve really missed while playing with Android tabelts, since it’s hard to select a precise bit of text or move forward or back by a single character when using your fingertip to tap on a capacitive touch display.

The keyboard doesn’t have any sort of touchpad. So while you might feel like you’re using a traditional laptop, there’s no cursor or mouse pointer on the display and if you want to interact with anything other than a text box on the screen you’re going to have to reach up from the keyboard and touch it. 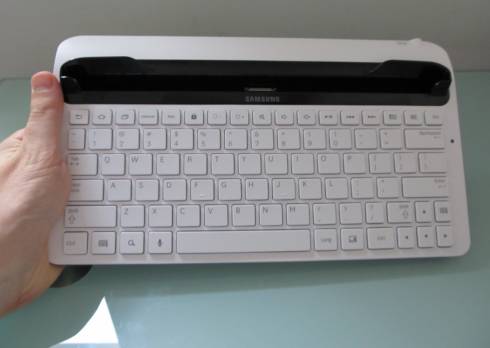 Some apps also don’t recognize keyboard features the way you might expect. For instance, when addressing a message in Gmail I tried to jump from the subject line to the body by pressing the Tab key. Nothing happened. I had to reach up and tap the screen.

I also found it a little disconcerting to type without a palm rest area of any sort. You’ll find yourself placing your palms on a table or other surface when using this keyboard. Depending on the available surfaces this might not be such a big problem, but I found it easier to type on a tabletop than on my lap.

5 replies on “Keyboard dock turns the Samsung Galaxy Tab 10.1 into a netbook (almost)”