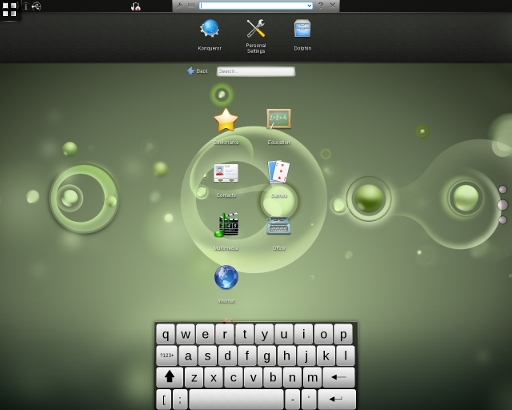 When we first saw it demoed on Linux netbooks in 2009, KDE Plasma was looking good. It brought a little sizzle to the desktop which was somewhat lacking in the Ubuntu Netbook Remix at the time. Now, the KDE team is looking to move beyond desktops and notebooks — and it hopes to deliver an exciting, adaptable Plasma experience for tablets, smartphones, set top boxes, and other devices.

And while Linux tablets are the primary target, “[…]stopping there would be a mistake,” states developer Marco Martin. According to Martin, the goal of Plasma Active is “to build both workspaces and applications that can adapt to the whole spectrum of devices,” including those which have yet to be produced. To add support for a new device, a Plasma Active developer would simply need to add a new user interface module tailored to its screen type.

Ostatic’s Susan Linton has spent some hands-on time with Plasma Active, and she was impressed with how well it functioned despite being a very early release. Help files are scarce and there’s plenty of polish needed, but Linton certainly seemed to enjoy the Plasma Active interface. Right now, curious testers can take Plasma Active for a spin on OpenSUSE — though Kubuntu seems like a good possibility later on as well.