Japan’s KDDI is one of the first telecom companies I’m aware of to sell customers an Android TV stick as a way to run Android apps on a TV. Of course, they call it a “Smart TV Stick, but under the hood the AU Smart TV Stick is a lot like products we’ve seen from companies including Tronsmart and Rikomagic.

It’s a small stick that looks like an oversized USB flash drive. You plug it into a TV, wave around the wireless remote control, and run Android apps on your big screen.

One thing that does set the KDDI stick apart from many others is its processor. It’s powered by the same chip found in the original Amazon Kindle Fire (and more recently, the Google Glass Explorer Edition). 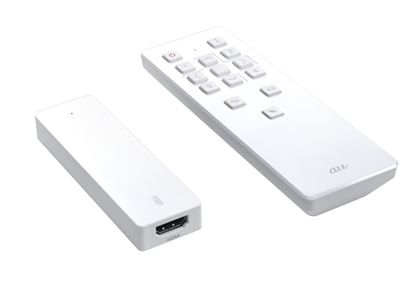 KDDI’s TV stick is running Google Android 4.0 and features access to the Google Play Store, although many apps are reportedly unavailable for download. We can probably thank KDDI’s custom version of Android designed to access the company’s own apps for that.

The Smart TV Stick sells for about $99 in Japan.

There aren’t many other devices of this type that use a TI OMAP processor. But the upcoming Archos TV Connect is expected to ship with a faster OMAP 4470 chip.