The Kangaroo notebook is one of the stranger laptops to launch in 2016, because it’s actually a 2-part computer. What looks like the notebook is actually just a shell with a screen, battery and keyboard.

The heart of the computer is a removable module called the Kangaroo Mini. It has the processor, storage, memory, and operating system. And when you buy a Kangaroo Notebook you get two Kangaroo Mini modules, which means you sort of have two completely separate computers… that share a single notebook shell.

InFocus unveiled the Kangaroo Notebook in September, and now it’s available for purchase from Newegg for $300. 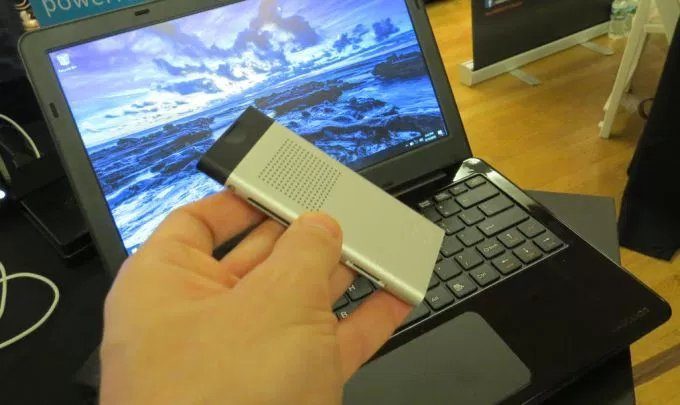 The idea of a modular notebook could be very exciting, since it opens the possibility of using an existing Kangaroo Mini in a larger or higher-resolution laptop dock in the future… or keeping the current laptop dock, but inserting a new Mini with more powerful hardware.

But Kangaroo isn’t committing to releasing anything other than what’s available today: a single laptop shell that comes with two PC modules.

And both parts are kind of underwhelming.

The laptop shell features a 1366 x 768 pixel TN display with limited viewing angles, a 37 Whr battery for up to 5 hours of battery life.

There’s a QWERTY keyboard and a Synaptics Clickpad and the system has a USB 3.0 port, a USB 2.0 port, a 1MP webcam, a 3.5mm audio jack, and an SD card reader.

As for the Kangaroo Mini PC module, its most impressive element is its tiny size. a Kangaroo Mini measures just 3.8″ x 1.6″ x 0.34″ and weighs about 1.8 ounces.

The problem is that the Kangaroo Mini + Kangaroo Notebook shell gives you the kind of hardware you’d expect from a $150 computer. But InFocus is charging $300 and bundling a second Kangaroo Mini.

That kind of makes sense, because there’s no reason to buy the Kangaroo Mini unless you plan to use its modular capabilities. So why not package two modules with the system and charge a little extra?

Have two kids? Buy a Kangaroo Notebook and each kid can have their own set of software on a module they own. But only one can use the notebook at a time.

But wouldn’t it have been way cooler if instead of selling a single laptop dock with two identical low-power PC modules, InFocus had released a assemble-your-own-system range of products that lets you choose the features and/or price point you’re comfortable with?

For example, I’d be a lot more tempted by something like this:

As things stand,  can’t help but think that if you’re interested in a Kangaroo Mini, you might be better off just buying two refurbished Asus EeeBook X205TA or Lenovo IdeaPad 100S laptops instead.

On the other hand, if nobody buys the first-gen Kangaroo Notebook, it’s a pretty safe bet that InFocus won’t bother developing additional hardware for this modular PC system.