I’ve seen a lot of tiny desktop computers in the past few years. The Kangaroo Mobile Desktop is one of the most unusual.

This little Windows 10 computer isn’t as small as an Intel Compute Stick or as powerful as an Intel NUC-style system. But this little computer from InFocus is small enough to slide into one pocket, speedy enough to handle most basic computing tasks, and packed with a few special features: for instance it can keep running while it’s in your pocket, thanks to a built-in battery that keeps the computer going even when it’s unplugged. 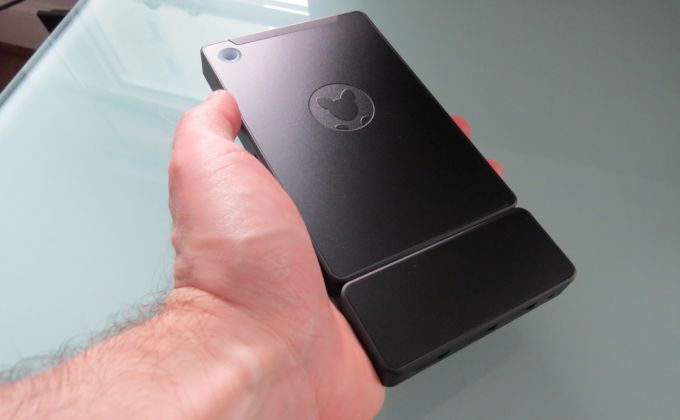 The Kangaroo Mobile Desktop went on sale for $100 in late 2015, and you can pick one up for about that price from Newegg or the Microsoft Store.

This year InFocus also launched a $170 model with twice the memory and storage, but no operating system.

The company loaned me the cheaper model for the purposes of this review, and there’s a lot to like about this tiny desktop. But it’s a good idea to figure out what you plan to use it for before spending $100 on a device that may or may not meet your needs.

The Kangaroo Mobile Desktop is basically a little desktop computer with the guts of a cheap Windows tablet (sans the screen) in a package the size of a smartphone. 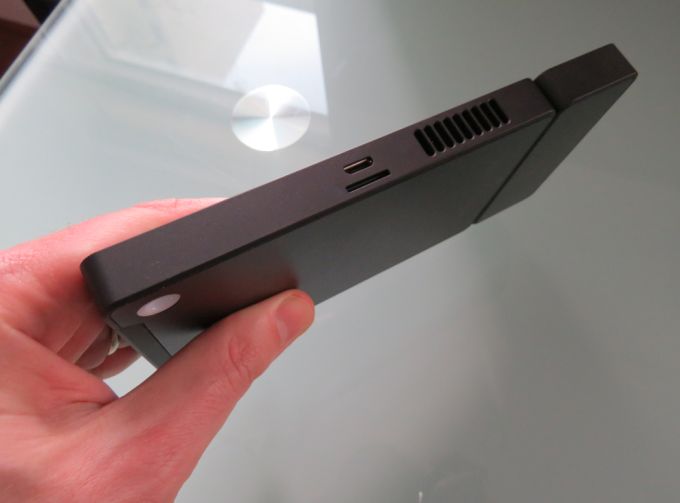 On one side of the little computer you’ll find a microUSB port (which can be used to slowly charge the battery, but not to transfer data), a microSD card reader, and a vent (there’s no fan in the case, but the vents help dissipate heat).

On the other, there’s another vent, a power button, and two things you might not expect to see on a device in this category: a fingerprint scanner and an action switch. 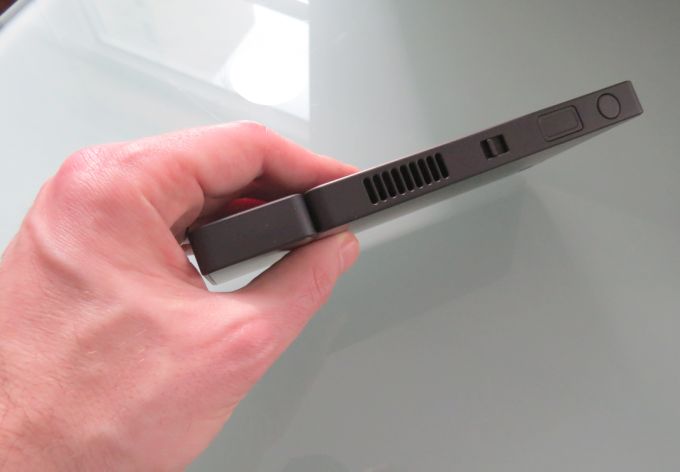 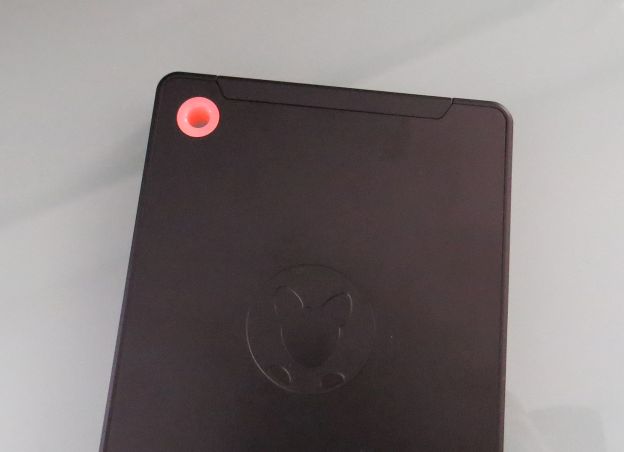 The fingerprint reader lets you login to Windows without typing a password or entering a PIN. You will need to go into the Windows 10 sign-in options and set up a PIN before you have the option of registering your fingerprints. But once you’ve done that, it becomes pretty easy to login without touching your keyboard. 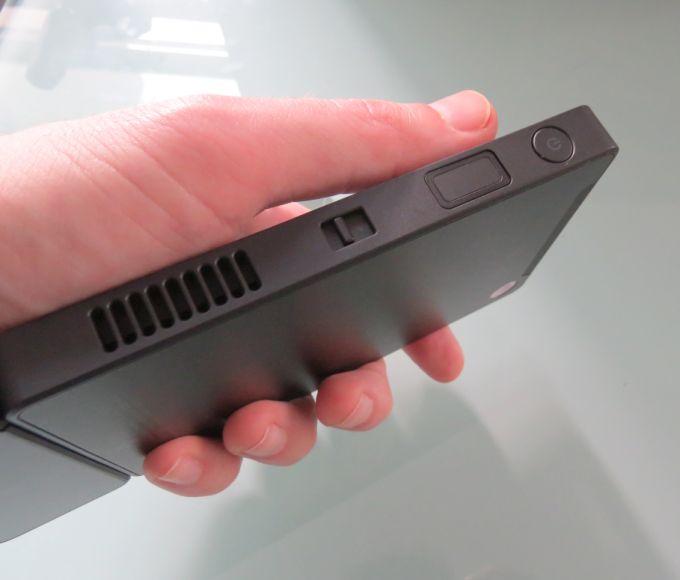 The scanner isn’t quite as fast or as accurate as the ones you’ll find on some smartphones (like the Nexus 5X and Nexus 6P, which I reviewed recently), but it’s still a quick way to login, especially if you’re using the Kangaroo in a fashion that doesn’t involve plugging in a keyboard. 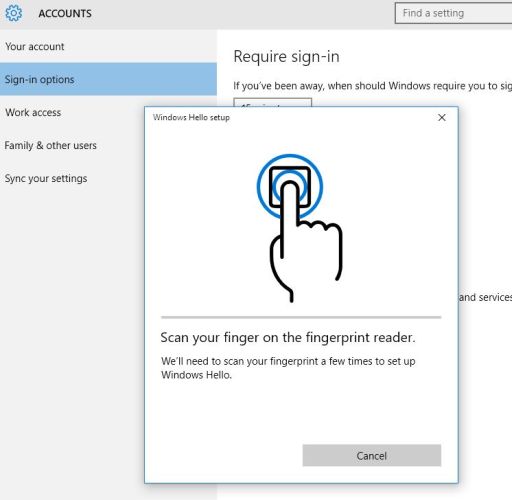 The action switch is designed to let you set up a private wireless connection to the Kangaroo using WiFi Direct. Again, this could come in handy if you’re using the system without plugging it into a keyboard or even a display.

You’ll still need to install VNC or other remote desktop software to use this feature, but it lets you establish a local connection even if the Kangaroo and the PC you want to connect to are not connected to the internet.

One other funny thing about the Kangaroo computer? There are no full-sized USB or HDMI ports on the body of the computer itself… instead it comes with a small “dock” the plugs into the end of the computer. 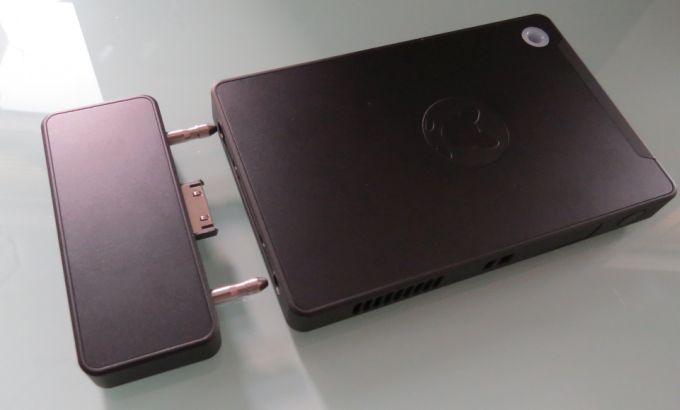 The dock that comes in the box features an HDMI 1.4b port, a USB 3.0 port, and a USB 2.0 port as well as a DC input for the computer’s power adapter. In the future, InFocus could offer other docking solutions that add features including VGA or Ethernet ports. 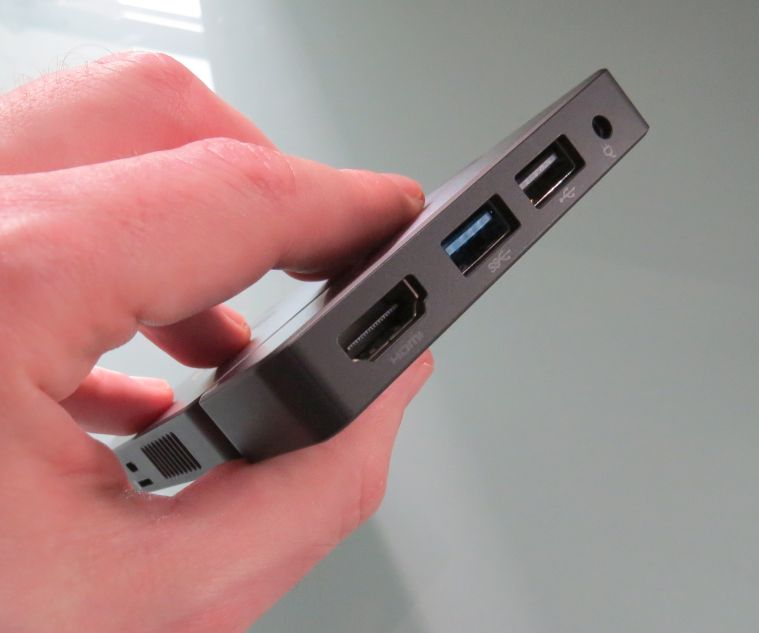 The current dock does not include a 3.5mm headset jack, so if you want to connect headphones or speakers you’ll either need to use Bluetooth or invest in a USB audio dongle (and probably a USB hub or extension cable).

The $170 Kangaroo Plus model has the same processor, battery, and wireless capabilities, but it features 4GB of RAM and 64GB of storage and does not have an operating system pre-installed.

What can you do with it?

InFocus positions the Kangaroo Mobile Desktop as a solution for use at home, at work, or while on the go.

Since it’s basically a full-fledged computer, albeit a low-power one, you can use it to run business or productivity apps including Microsoft Office, Adobe Photoshop, Quicken or Quickbooks, and much more. 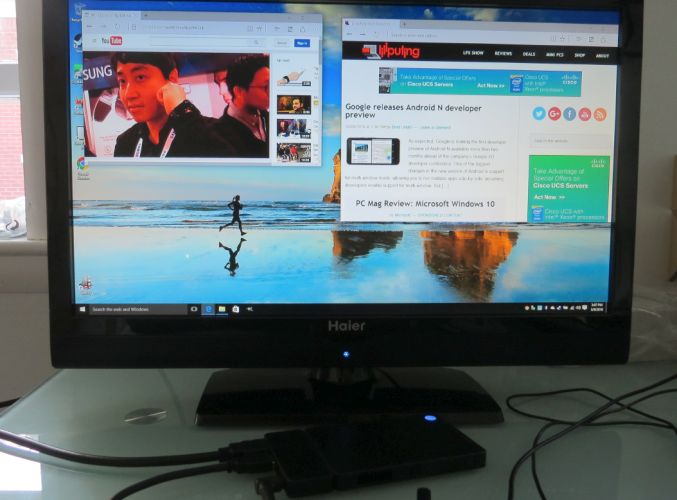 Or you can use it as a media-centric device. Plug it into a TV and you can watch videos from Netflix, YouTube or Hulu on a big screen, play (some) games, or access your music, movies, and photos.

Thanks to the built-in battery, the Kangaroo computer can run for up to 4 hours at a time even when it’s not plugged in. InFocus offers an OSLinx app that lets you connect the computer to an iPad with a USB cable, turning an iPad into a sort of portable display for the little Windows computer.

Note that there’s no way to deliver audio to an iPad though. You’ll need Bluetooth headphones or speakers if you want to hear sound on the go.

But I think the battery could come in handy even if you just plan to use the system at home or at work. Hook up the computer to a keyboard, mouse, and monitor in your home office to get some work done… then unplug it and carry it to the living room and hook it into a TV to watch videos. No rebooting necessary. 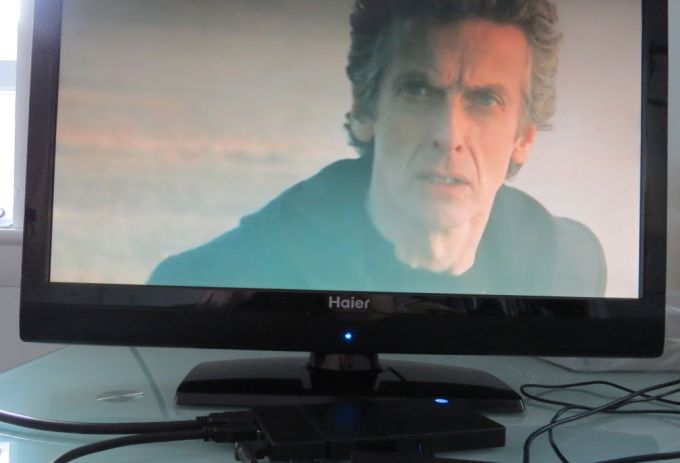 I also like the idea of using it as a media center or file server that won’t shut down unexpectedly in the event of a power outage.

That said, there are some serious limitations to using this sort of device in any of those ways:

I ran a few benchmark tests on the Kangaroo Mobile Desktop, and found that it’s faster than the entry-level 2016 Intel Compute Stick in just about every way, which isn’t surprising since the Kangaroo system has a faster processor and faster eMMC storage (but which is a little surprising when you consider that it also has a lower price tag). 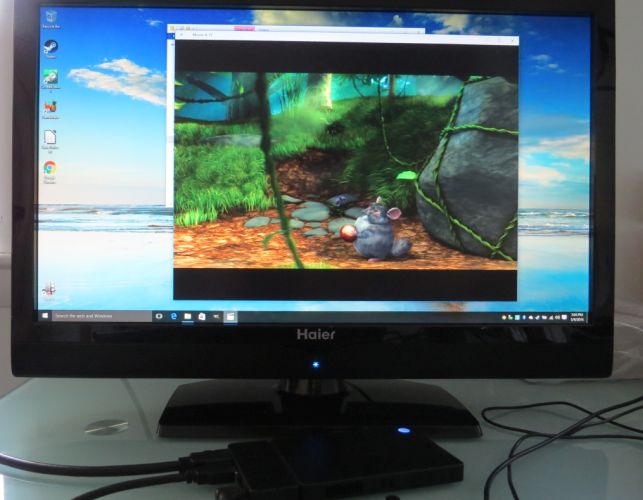 But this computer isn’t exactly a speed demon. I was able to play 2160p/60fps H.265 videos using the Windows 10 Movies & TV app and Kodi 16 media center, as well as 1080p streaming video from YouTube.

When I tried opening half a dozen tabs in the Google Chrome or Microsoft Edge web browsers, though, CPU and memory usage maxed out and the computer slowed down significantly for a while.

According to Speccy, the CPU also gets rather warm under stress, sometimes hitting temperatures higher than 180 degrees Fahrenheit (82 Celsius). 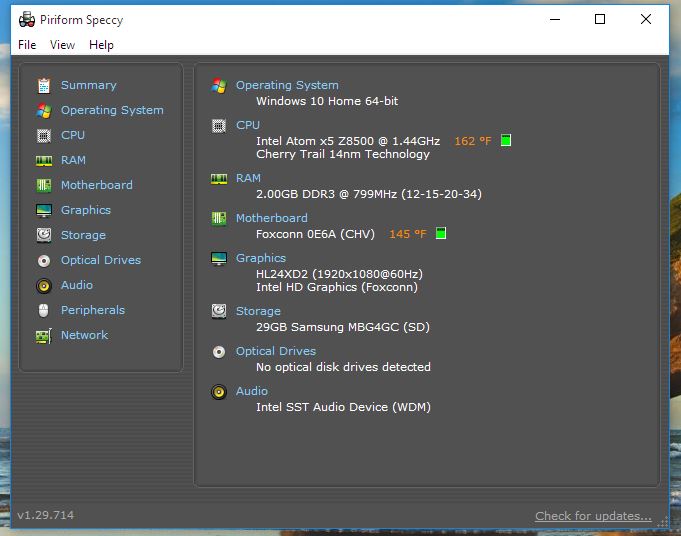 Overall, like a lot of tiny, inexpensive desktops with Intel Atom processors and small amounts of memory, the Kangaroo Mobile Desktop is kind of impressive as a system that can run just about any Windows app… but kind of underwhelming if you were hoping it would run those apps as well as a more expensive PC with a chip that uses more than a few watts of electricity.

I tried using the computer as my work machine for about half a day, and managed to write three or four articles for Liliputing by using Google Chrome to research and write blog posts and the GIMP image editor to crop, resize, and save pictures. The computer felt noticeably slower than my usual work machine (a laptop with an Intel Core i5 Ivy Bridge processor and 12GB of RAM), but I was able to get the job done… as long as I closed browser tabs as soon as I was finished with them. 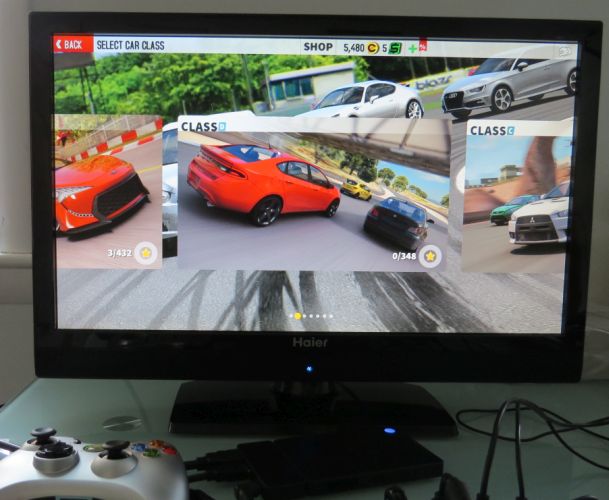 I also wanted to see how the system handles games, so I downloaded GT Racing 2 from the Windows Store and connected an Xbox-style game controller. Graphics looked pretty good and the game handled nicely. Just don’t expect to be able to run recent AAA games on a $100 computer with an Atom processor and Intel HD graphics.

How does it compare to other tiny desktops?

None of these computers are speed demons, though. If you really want better performance, you’re going to want to opt for a system with at least an Intel Core M3 Skylake processor (or maybe a Pentium N3700 Braswell chip if you’re on a budget).

But it’s impressive that the Kangaroo mini PC is still one of the fastest in is class because it’s one of the cheapest in its class… and certainly the only model I’ve tested with a fingerprint scanner and a battery.

Other special features like the action switch for WiFi-direct connections and modular docking system also help set this model apart… although right now I don’t personally have much use for the private WiFi networking and the docking port is of limited utility until InFocus actually launches some other docks for the platform.

Sure, why not? I mean… I don’t think I’d recommend the Kangaroo Mobile Desktop if you’re looking for a PC that you can use as your only computer. But I’m awfully tempted to pick one up and stick it by the TV in my living room.

Right now I’ve got an old Dell Zino HD computer with a 25 watt processor and a noisy fan in that position. I’d love to replace it with a smaller, fanless system that uses less than one fifth as much power. And the Kangaroo Mobile Desktop is almost as fast as the Zino HD (and does a better job with Ultra HD video playback). 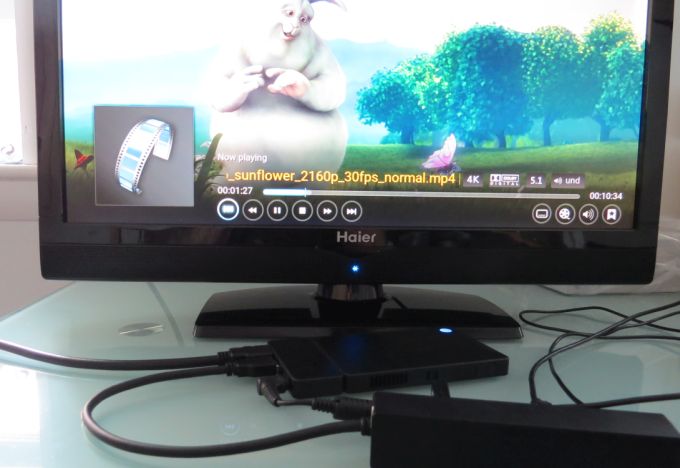 There are a few things keeping me from doing that though. Since there’s only 32GB of storage space on this model, I’d need to attach a USB hard drive to make the Kangaroo into a real replacement for my media center/file server computer. And the 2GB of non-upgradeable RAM can be a bit of a bottleneck.

I would have liked to have had a chance to test Kangaroo’s 4GB model, but even if it handles multitasking better than the 2GB model, I’m not sure I’d be interested. Not only does the 4GB model cost $70 more, but it doesn’t come with an operating system which means I’d either need to pay for a Windows license or migrate all of the software on my living room computer to a Linux-based operating system, which would be a bit of a hassle. 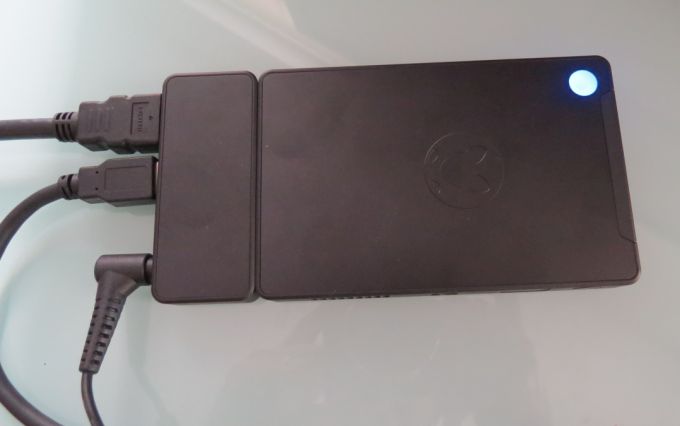 That said, your needs may be different than mine. If you’re looking for an inexpensive second or third desktop computer that you can use with your TV, give to your kids, or ferry back and forth from work to home, the Kangaroo Mobile Desktop is a nice little solution that won’t break the bank.

One complaint I often see from readers when I post reviews of mini-desktops is that they don’t offer any features that you couldn’t get by plugging a cheap Windows tablet into a monitor or TV.

I’d argue that there are benefits to having a tiny, low-power solution that you can just leave plugged into a display all the time. But the Kangaroo Mobile Desktop is one of the first models I’ve reviewed that is also cheaper than most tablets and has special features like a fingerprint scanner that you won’t find on most low-cost tablets.

Overall, it’s a nice little computer… assuming you can find a use for it.