As you might have noticed, this year’s IF World Design Guide awards have been announced. And while I don’t particularly care about which companies have received awards, I do enjoy scrolling through the list of awardees for new and unusual devices I haven’t seen before.

They don’t get much weirder than Kaleido. 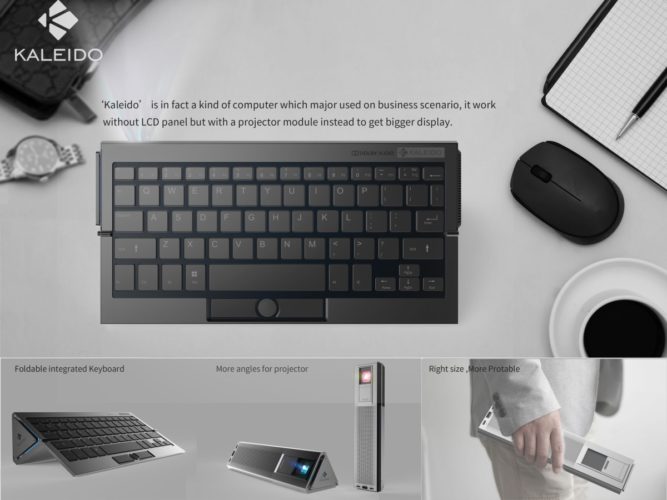 It’s basically a portable computer with a long triangle/prism-shaped design that you can pick up and carry in one hand. The IF Design Guide listing describes it as being “as big as a bottle.”

There’s no screen, but there is a built-in projector that you can use to make any white surface a display.  And since the ends of the computer are flat, you can stand Kaleido up to give the projector a bit of height, or lie it on its side.

An integrated mic and speaker lets you use Kaleido as a video conferencing PC or for making presentations.

But there’s also an integrated keyboard that folds flat against one side of the triangle when you’re not using it, and which extends outward when you are. That lets you use Kaleido as a full-fledged computer… assuming you’ve got a surface suitable for projecting the display onto.

Alternately, you could use one of the ports on the bottom of the computer for video output to an external monitor. It appears to have at least two USB-C ports and a USB-A port.

There’s no word on if or when the Kaleido will ever become a real thing you can buy, but according to the IF Design Guide listing, it was designed by a Chinese company called Hefei LCFC and it’s targeted at customers around the globe.