The JXD S602 isn’t the first handheld Android device designed to look like a Sony Playstation Portable gaming console. But it is one of the first to run Google Android 4.0 Ice Cream Sandwich.

Better yet, you can pick one up from Willgoo for just $66. 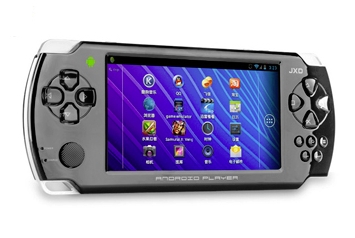 The device also supports HDMI output, letting you play games on a big screen display, which is a nice feature if you’re not satisfied with the device’s 4.3 inch, 480 x 272 pixel display.

To be fair, that’s the same size and resolution as the original Sony PSP. But since the JXD S602 runs Android, it can handle apps and games designed for higher resolution screens.

As you’d expect from a $66 device though, the JXD S602 doesn’t exactly feature top-of-the-line hardware. It has a 1 GHz ARM Cortex-A8 processor, PowerVR SGX531 graphics, 512MB of RAM and 4GB of storage. There’ sa microSD card slot for extra storage.

The handheld gaming device has a 2-point multitouch resistive touchscreen, and a G-sensor, which lets you play touch-based games or titles that can take advantage of motion controls. It also supports 802.11b/g/n WiFi and features a 0.3MP camera. There’s a 2500mAh battery.

You can also use the device as a media player. It can handle MP3, WMA, FLAC, and OGG audio files and DivX, MP4, FLV, and other video formats.

If you’re looking for something with a faster processor, larger display, and support from a company you might have actually heard of, Archos plans to launch a 7 inch gaming tablet soon. But the Archos GamePad will cost more than twice as much. It’s expected to cost 150 Euros ($188) when it hits Europe in October.