JXD has a habit of making handheld gaming consoles that run Google Android software. They also tend to look like knockoffs of other popular products.

The JXD S5110, for instance, looks a lot like a Sony PlayStation Portable. And the JXD S5100 Deluxe Gaming Tablet looks like a Nintendo 3DS… with a single screen. 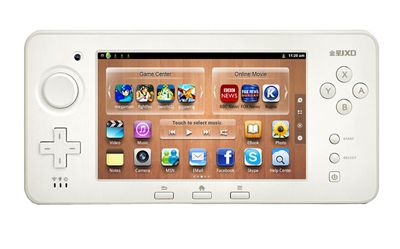 The tablet also has a series of buttons and directional pads around the sides of the screen for gaming. It includes software for playing Nintendo, Nintendo 64, Gameboy Advance, and other games.

Most games developed for Android are meant to be used with a touchscreen, and the JXD S5100 has support for 5-point multitouch. But if you’re using an emulator to play classic console games, those buttons could come in handy. Some newer Android games can also be used with game controllers, and the JXS S5100 essentially has one built in.

Out of the box, the gaming tablet runs Android 2.3, but an Android 4.0 update is on the way.