NVIDIA’s Shield isn’t the only handheld gaming device powered by Android. Chinese device maker JXD has been making Android gaming tablets for a few years, and the company’s latest is the most powerful yet — and it sells for just over half the price of an NVIDIA Shield. 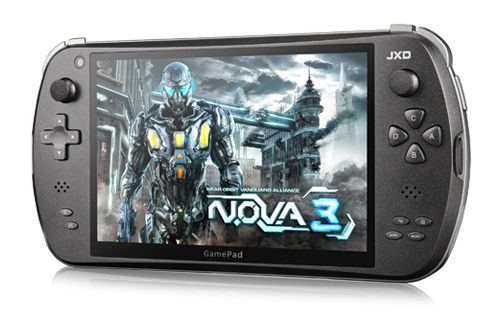 There are two versions of the new JXD S7800 tablet, but both feature 7 inch, 1280 x 800 pixel IPS displays, quad-core processors, and designs that look a lot like a PlayStation portable. Neither is quite as powerful as the NVIDIA Shield, which packs a Tegra 4 ARM Cortex-A15 quad-core processor, but with prices running around $160 to $170, that’s not a huge surprise.

It runs Android 4.2.2 Jelly Bean, sports stereo speakers, front and rear cameras, HDMI output, and a series of buttons on the sides and edges of the tablet which you can use to play games.

Many Android games are designed for touchscreen controls — and you can us the 7 inch touchscreen to play if you’d like. But for games that support physical controls, you can use the D-pad, analog sticks, shoulder buttons, and other controls.

JXD also points out that the tablet can run a series of emulators that let you play classic games for the PS1, Gameboy, and other consoles.

If you want to save a few bucks, JXD also offers a model with a 1 GHz Allwinner A31 ARM Cortex-A7 quad-core processor and 1GB of RAM.

The rest of the specs are pretty much the same as those for the Rockchip model. I’m not really sure why you’d bother buying this model, considering it’s only $10 less.

WillGoo is taking pre-orders for $160.

Both JXD S7800 gaming tablets are expected to ship in late August or early September.