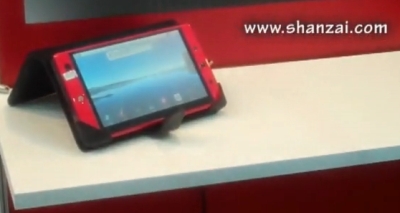 Chinese PC makers Joyplus are showing off a series of tablets at Computex. And rather than stick its eggs all in one basket, the company is going with a little variety. Joyplus is demonstrating 5, 7, and 10 inch tablets, with the largest models running Windows 7 and the smaller units running Google Android.

The 10 inch model looks like an oversized iPod touch, complete with a home screen. But in addition to Winodws 7, this model has HDMI, USB, and SD card slots.

The 5 and 7 inch models have ARM-based processors from Marvell and TeleChips.

The 7 inch model appears to have a 600MHz dual core ARM926 CPU, 800 x 480 pixel display, 128MB of RAM, and a 2000mAh battery. The specs seem to imply that this model runs Windows CE, although the promotional photo shows Google Android.

The folks at Shanzai.com caught up with Joyplus at Computex and shot a brief video, which you can see below.