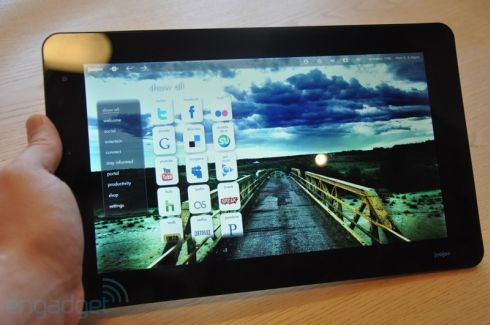 When TechCrunch founder Mike Arrington first came up with the idea for the CrunchPad tablet, here’s what he wanted: A cheap touchscreen tablet that was pretty much just a screen and web browser. He partnered with the folks at Fusion Garage who started to build it and design custom software to make the web browser usable. And then after a huge falling out, Fusion Garage renamed the product and brought it to market as the JooJoo. And it appears they may have taken the whole nothing-but-a-browser thing way too literally.

Engadget has posted a detailed review of the tablet. And while the 12 inch tablet is attractively minimalist and has a nice big 12.1 inch, 1366 x 768 pixel display, the software seems to be a little too minimalist.

For instance, the home screen features shortcuts for a bunch of web sites. Click on any to launch the browser. But there’s no button for just… the browser. In order to enter a URL, you first need to pull up say, CNN, and then enter a new URL in the location bar. In order to do that, you need to pull up the on-screen keyboard, which Engadget says is usable, but not great. And oh yeah, if you press the comma key, you get a quotation mark instead. Nice.

There’s no media player and no picture viewer. If you want to listen to music or watch movies, you’ll need to fire up a web site that lets you do those things. And while there’s a webcam for video chats, Engadget couldn’t find a web based video chat site that would work with the camera.

What’s more, Fusion Garage threw in NVIDIA ION graphics so that you could watch HD Flash video on the tablet — but the version of Adobe Flash Player that the JooJoo ships with doesn’t support hardware acceleration, which means you’re still pretty much stuck with standard definition Flash video.

It sounds like most of the issues Engadget had with the tablet were software issues. Sure, from a hardware standpoint, the tablet’s a bit big and heavy to hold in one hand, and the viewing angles aren’t great. But for a $499 tablet, those issues don’t sound too bad. The software, on the other hand, sounds like it wasn’t very well thought out.

Of course, there may be an easy fix for that — install your own software. The biggest thing setting the JooJoo tablet apart from the iPad is that the JooJoo has an x86-based processor and a USB port. It’s not entirely clear at the moment whether you can plug in a USB flash drive and use it to boot an alternate OS. But if you can, the JooJoo sounds like it could easily get a second wind with an alternate operating system such as Google Chrome, Android, or Ubuntu Linux. Or how about a touch-friendly version of Jolicloud?

6 replies on “JooJoo tablet reviewed: Verdict? Maybe you should replace the operating system”