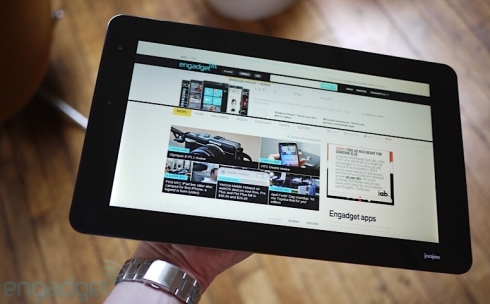 It’s been a long strange trip, but the JooJoo tablet is apparently now shipping. The folks at Engadget got their hands on one of the first units, and while a full review is still a few days off, Engadget editor Joshua Topolsky has posted some unboxing photos and a brief video overview of the user interface.

It’s possible that fewer than 100 JooJoo tablets are actually out there at the moment. Gizmodo dug up some documents in the ongoing lawsuit between TechCrunch founder Mike Arrington and Fusion Garage, the company responsible for the tablet. And it looks like only 90 tablets were pre-ordered. That’s pretty shocking for a device that has gotten as much attention in the tech blogosphere as the JooJoo.

Sure, at $499, the JooJoo tablet basically surfs the web — and that’s it, while for the same amount of money you can pick up an iPad with access to more than 150,000 third party apps. But the JooJoo tablet has a larger, higher resolution display and NVIDIA ION graphics for handling HD Flash video playback — although Engadget says at the moment HD Flash doesn’t look very smooth. It’s possible that this will change when the next version of the Adobe Flash Player is released.

The user interface looks pretty decent, with a series of shortcuts on the home screen for accessing web sites — although Engadget hasn’t figured out if there’s a way to customize those bookmarks yet. The on-screen keyboard is described as decent, and the browser can easily handle multiple tabs which you can flip through by scrolling left or right.

You can check out Engadget’s hands-on video after the break, or hit up Engadget for the unboxing photos. And you can read more about the tablet at thejoojoo.com.