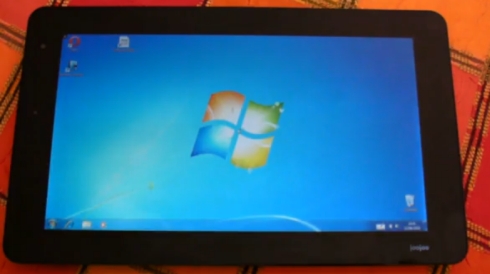 The JooJoo tablet started as an ambitious project called the CrunchPad. The idea was to provide a tablet that was basically nothing but an interface for a web browser, allowing you to sit on the couch and surf, getting online in a matter of seconds. The finished product is pretty much just that — but it’s a bit underwhelming, unresponsive, and for about the same price as an iPad, you get a heck of a lot less… sort of.

Thing is, the JooJoo hardware is actually capable of much more. It’s just that the custom software interface doesn’t support third party native apps. But members of the JooJoo Forums have discovered that it’s not all that tough to install Windows 7 and turn the JooJoo into a much more versatile tablet.

While the accelerometer and 3G modem aren’t currently supported, hackers have gotten the touchscreen to play nicely with Windows 7, which means you can use an on-screen keyboard to enter text, use any web browser you like, and play 720p HD video using the media player of your choice.

You can check out a video of the tablet running Windows 7 after the break. It seems a heck of a lot more versatile than the JooJoo running the default custom Linux interface.