Want to try out Jolla’s Sailfish operating system without buying a Jolla phone? Now you can run a developer preview version of the software on a Google Nexus 4.

Jolla has released an official Sailfish OS image for Google’s last-generation Nexus phone, along with instructions for installing the software. 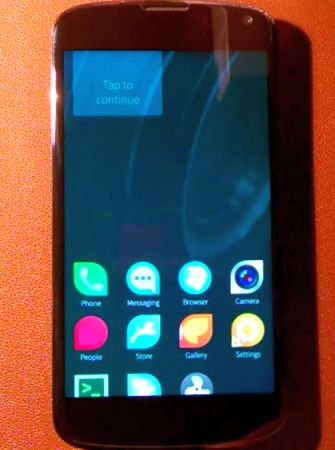 Sailfish is an open source, Linux-based operating system designed with an emphasis on gesture-based navigation, support for web apps, and the ability to run Android apps as well as native Sailfish software.

Jolla was founded by former Nokia employees who wanted to continue working on a Linux-based phone platform after Nokia discontinued its MeeGo efforts and started working with Microsoft on Windows Phone devices.

The instructions for loading Sailfish on the Nexus 4 should look familiar to anyone who’s ever flashed a custom Android ROM. In fact, the first few steps involved flashing your device with CyanogenMod and then flashing Sailfish on top of it. If you’re already running CyanogenMod 10.1.3 you might be able to skip most of the steps and just download and install the 354MB sailfishos-mako-release-1.0.4.20-EA1.zip file.

This is an early adopter release which has a watermark on the screen at all times, and some important features are missing from this first release. For instance you can send and receive SMS messages, but there’s no call audio yet.

We saw an early version of Sailfish running on a Nexus 4 in January, but now that Jolla has released an official image you can take it for a spin yourself… just don’t expect it to replace Android as your primary operating system just yet.

You just might want to make a nandroid backup of your device using CWM, TWRP, or a similar tool first so you can restore it to its previous state when you’re done poking around.

via xda-developers and The Jolla Blog