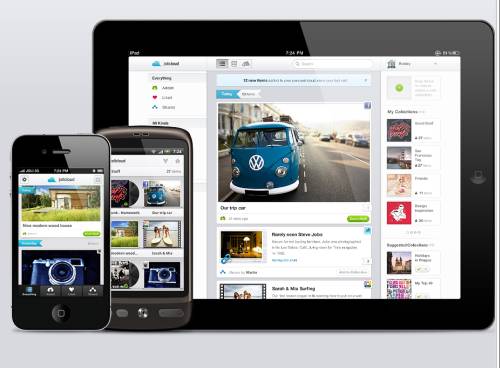 Jolicloud is getting ready to roll out a new cloud-based service that the company says will offer a new way to interact with all of your online services from one place — and that place can be a web browser, smartphone app or tablet app.

When Jolicloud first launched, the company made an operating system for netbooks based on Ubuntu Linux. The “cloud” part of the name signified two things: the ability to “install” web apps to your desktop so you could launch them quickly just like native Linux applications, and a social element that let you share your recent activity with your peers.

Eventually the company rebranded the operating system as Joli OS and added support for all sorts of computers including desktop and larger laptop computers. Now the name Jolicloud describes a web-based service.

If you log into your Jolicloud account today from any web browser, you can see a list of apps installed to your account. You can launch web apps from the browser, or even organize your desktop apps. If you install VLC, OpenOffice, or another app from the website, it will be available to download next time you turn on your computer running Joli OS.

The new Jolicloud takes a decidedly social turn. While the company hasn’t laid out all the details, existing users can login to beta.jolicloud.com and associate their Facebook, Twitter, Picasa, Flickr, and Instagram accounts with Jolicloud. Support for additional web services such as Dropbox, Google Docs, Instapaper, Tumblr, and Evernote is on the way.

Judging by the screenshots Jolicloud has released, you’ll be able to find the latest updates from each of your accounts in one place by firing up the Jolicloud apps for iOS or Android. There will also likely be a new web interface for managing all of your cloud information from any computer with a web browser.

The company is accepting signups for participation in the new Jolicloud beta, and invites are expected to start going out soon.

It sounds like the emphasis will be on the new Jolicloud “personal cloud” service from here on out. In a blog post announcing the new service, founder Tariq Krim points out that Joli OS is an open source project… which kind of implies that future improvements may now be in the hands of the community.