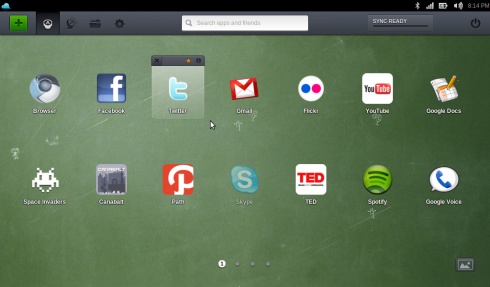 Jolicloud will unveil version 1.2 of its Linux-based operating system later this week. But it won’t be Jolicloud 1.2. Instead the company will name the operating system Joli OS 1.2. The name change is part of a shift in focus.

Jolicloud initially launched as a netbook operating system, blurring the line between native and desktop apps by letting you “install” shortcuts on your home screen to web apps for services like Gmail, Facebook, or Picnik just as easily as installing native apps like Skype or GIMP.

Over the past few years, the Jolicloud team has broadened the operating system’s hardware support so that it now runs on desktop computers and full sized laptops just as well as it runs on netbooks.

At the same time, Jolicloud has been moving away from the desktop OS a bit — putting some of the operating system in the cloud. If you have a Jolicloud account you can login and view your desktop from any supported web browser. If you’re borrowing a friends’ computer, you can turn it into your Jolicloud environment simply by entering your username and password and clicking on the icons for web apps as if you were using your own system — although native desktop apps like Skype clearly won’t work.

A nice side effect of that cloud focus is that you can install the desktop operating system on multiple computers and your settings and apps will automatically be installed on the new machine — including native desktop apps.

Anyway, now Jolicloud offers a desktop operating system and a web app which is available in the Chrome Web Store (and which should soon work just as well on any HTML5-capable web browser).  To distinguish between the web app and the native app, the company is naming the web app, online desktop, and sync service Jolicloud while referring to the desktop operating system as Joli OS.

Jolicloud will also soon offer an Android app. The company hasn’t yet decided if the app will be for Android tablets only (which would allow you to view your full desktop and run most web apps just as you would on any other computer), or if there will be a smartphone version as well.