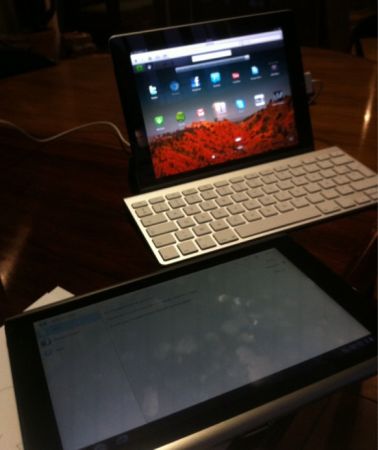 Jolicloud founder Tariq Krim has shared the first photo of the company’s new apps for the iPad and Android tablets. Jolicloud started out as a Linux-based operating system designed for netbooks with a heavy reliance on web apps and online profile syncing. But recently the company rebranded the operating system as Joli OS and started pushing a web app for the Google Chrome web browser that lets you access your Jolicloud environment from any computer.

Jolicloud 2 will take things a step further, letting you login to your Jolicloud account on a tablet for quick access to web apps such as Google Docs, YouTube, or Aviary.

In the photo, Tariq Krim showed the Jolicloud user interface running on an Apple iPad, and what appears to be a Jolicloud app store or settings panel on a tablet running Google Android 3.0 Honeycomb. If I had to guess, I’d say the Android tablet looks like an Acer Iconia Tab A500. Krim says Jolicloud 2 will also support Google Chrome OS.

There’s no word yet on when Jolicloud 2 will be available.