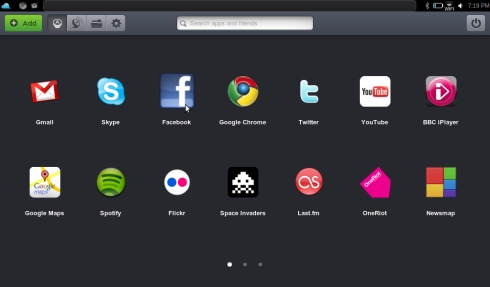 The Jolicloud operating system for netbooks has been available to public beta testers for ages, so I was actually a little surprised to notice that Jolicloud 1.0 is officially launching next week. I had kind of assumed that had already happened. But if you’ve been holding out on trying this Linux-based netbook operating system with a strong focus on web apps and social networking until the beta label was gone, it looks like the wait is almost over.

The latest version of Jolicloud comes preloaded with Firefox and quick aces s to web and desktop apps including Gmail, Skype, and Twitter. You can install new apps (adding icons to the Jolicloud program launcher) with a single click. And you can organize the program launcher to meet your needs.

There are over 700 web and native apps available in the Jolicloud App Center. Users can also share their apps with friends, which means if you know other people using Jolicloud you can find out which apps they’re trying and check them out yourself.

Because the Jolicloud user interface is HTML5 and web-based, you can organize your account from any computer with an HTML5-compatible web browser — you don’t need to have your netbook handy.

The Jolicloud team will start rolling out Jolicloud 1.0 to existing users next week.