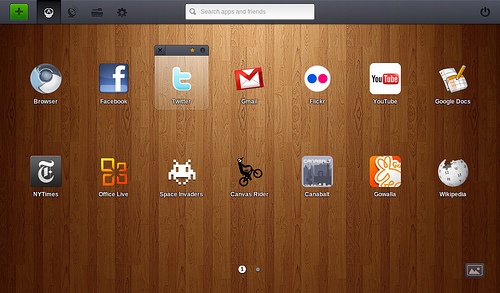 As expected, the folks at Jolicloud have officially launched Joli OS 1.2. The operating system is a light-weight Linux-based OS designed to blur the lines between web apps and native desktop apps. For instance you can “install” web apps such as Google Docs as well as native apps such as LibreOffice. Both will show up as shortcuts on you desktop, which makes launching a web app pretty much the same as launching a local one.

The latest version of the operating system is the first to wear the Joli OS name instead of Jolicloud. It also features a modest user interface  redesign, new wallpapers, and a native file browser with Dropbox integration for viewing remote files if you have a Dropbox account.

Joli OS also now makes it easy to create your own app simply by entering a name and URL.

Jolicloud has always pushed its social features as well, allowing you to add friends and see what apps they’ve been installing. Now there’s a public web page for each users, which you can use to display a list of apps you’ve starred. You can turn off this page if you dont’ want to share your app preferences with the world.

Joli OS 1.2 is available as a free download from the Jolicloud web site. You can either download a Windows installer which allows you to dual boot Windows and Jolicloud or you can grab a disc image for making Joli OS your main operating system.