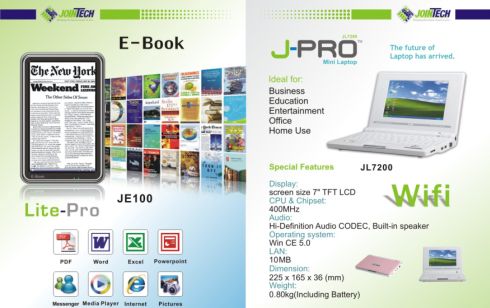 Remember the JoinTech JL7100? It’s the $99 netbook that’s hardly even really a netbook. The problem isn’t that it’s got a slow 400MHz CPU or that it runs Windows CE.

While I generally prefer to put Windows CE devices in a different class from typical netbooks, it’s possible that you could install Linux on the JL7100. And more importantly we’re starting to see interest from software companies in loading Windows CE onto computers that nobody would dispute are netbooks, like the Acer Aspire One and Lenovo Ideapad S9.

No, the reason it’s hard to think of the JoinTech JL7100 as a netbook is because it didn’t even have WiFi. If you wanted to connect to the net, you needed to plug in an Ethernet cable.

Now it looks like JoinTech is trying again, this time with the JL7200 which looks a lot like the JL7100. But the new machine will have WiFi and will sell for a whopping $25 more. So for $125, you can get a tiny clamshell machine with a 7 inch display, a 400MHz CPU, and WiFi. It’s not clear how much storage space you’ll get, but the JL7100 had just 64MB of RAM and 64MB for storage. That’s sufficient for Windows CE to run, but you’ll want to invest in an SD card if you want to store some files on the system.

Oh, and in order to get that $125 price, you’ll have to buy 1000 units. In other words, that’s the wholesale price. We’ll probably see resellers charging a few bucks more for the JL7200 soon. But I suspect you may be able to pick one up for under $200 in the not too distant future.

Asus Eee Hacks reports that JoinTech will officially unveil the JL7200 at the Hong Kong Electronics Fair next  week.

One reply on “JoinTech JL7200: Cheap netbook take 2 – this time with WiFi”