Jide is a startup that wants to make Android tablets more productive. The company’s Remix OS is a custom version of Android that lets you run multiple apps in small windows, and the Jide Remix Ultra Tablet comes with a keyboard cover that lets you use the tablet like a laptop.

The company started showing off the Ultra Tablet at the Consumer Electronics Show in January and now Jide is running a Kickstarter campaign in hopes of building a community around its products. 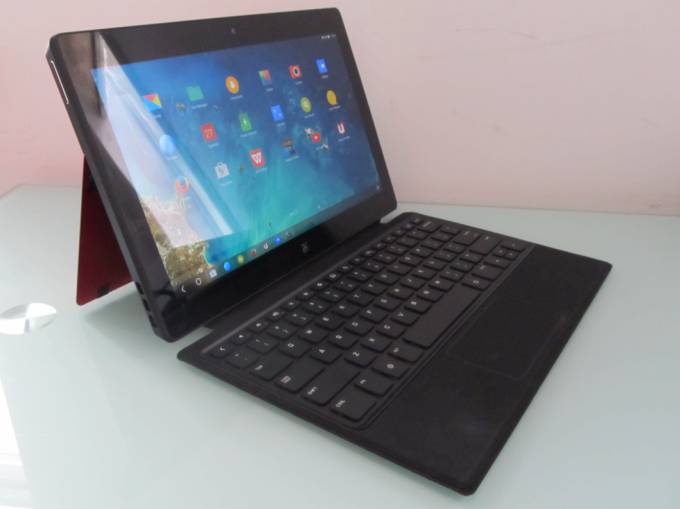 The company already has funding and a number of tablets have already been produced. But Jide is using the popular crowdfunding site to get units into the hands of early adopters who can help test and improve the software before the tablet is released in the US.

Jide sent me a demo unit to test, and here are some initial thoughts about the device.

But those aren’t the features that make it special.

Or to be a bit more blunt: Remix OS makes Android look a little more like Windows.

Not only is there a taskbar and support for running some apps in windows that you can reposition on the screen, but some of the default apps draw heavily from Microsoft’s Windows 8 design language, including the Files, Calendar, and Settings apps. 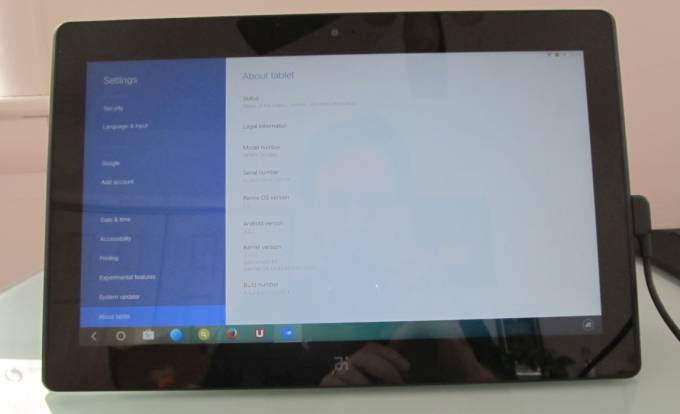 The tablet itself also bears a more-than-passing resemblance to a particular Windows tablet family: it looks a lot like a Microsoft Surface device thanks to its built-in kickstand and the included magnetic keyboard cover.

In fact, the Remix Ultra Tablet feels enough like a Windows device that I occasionally find myself tempted to swipe down from the top to close an app or from the side of the screen to switch apps. But it doesn’t support those gestures — swiping down from the top will display notifications or the Quick Settings panel. 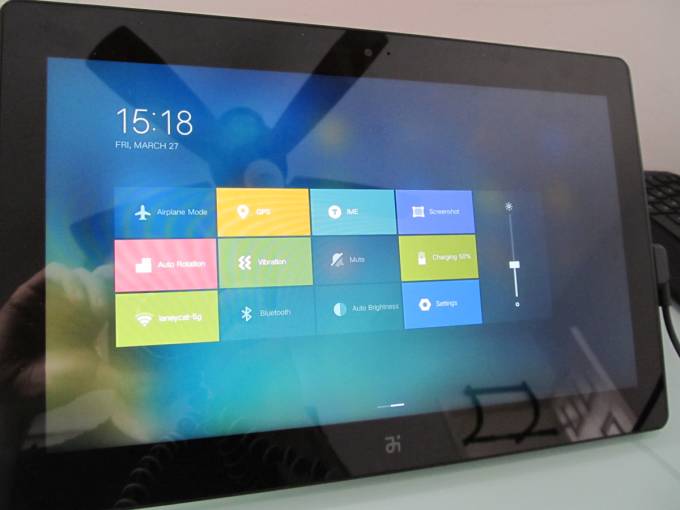 While it’d be easy to dismiss the tablet as a Surface clone, it turns out that an Android-powered Surface clone is actually a pretty intriguing device.

The tablet has nice build quality, a metal back cover, a dual-position kickstand, and a keyboard cover that’s pretty great to type on. Below the keyboard is a small touchpad which feels a bit funny since it’s made of the same velvety material as the palm rest, but which is smooth and responsive and which supports multi-touch gestures including two-finger scrolling. 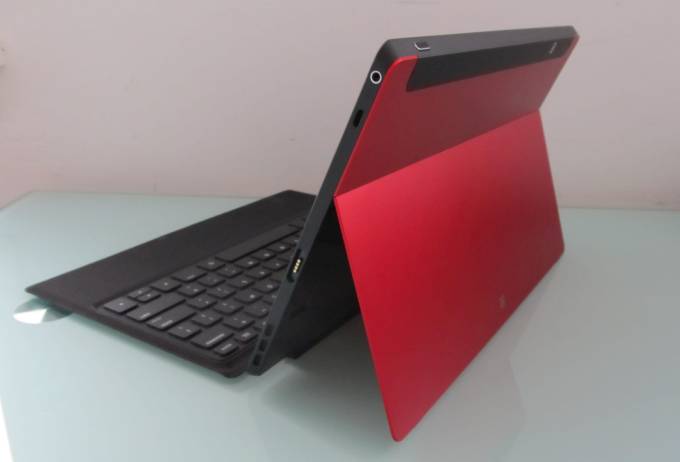 When using the device with the keyboard it’s easy to forget that this is a tablet rather than a notebook… but if you actually try to use the Remix Ultra Tablet on your lap instead of a desk or table, you’ll have to position the kickstand carefully if you want to keep the system from falling over. 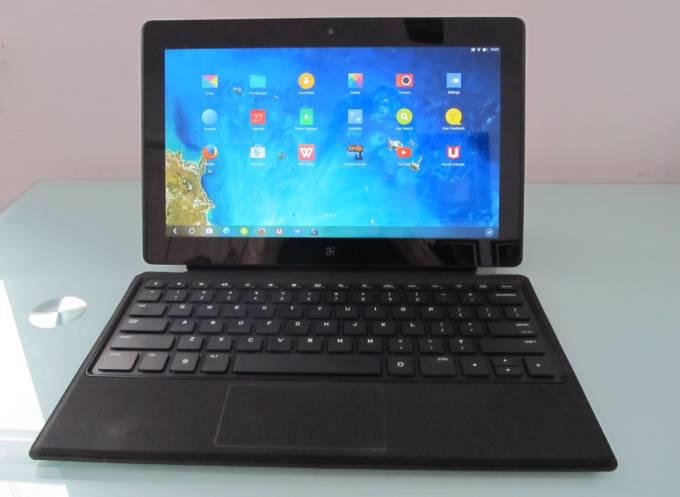 Remix OS is fully compatible with the Google Play Store and other Google apps. But it has a few unusual features. The first is the taskbar at the bottom of the screen.

An icon for any app that’s currently running will show up in the taskbar. You can switch between running apps by tapping the appropriate icon. And if you’re using a full-screen app you can bring up the taskbar by tapping the screen or swiping up from the bottom of the screen (the way you would to display on-screen navigation buttons on other Android phones or tablets that don’t have hardware buttons for home, back, and recent apps).

You can also pin apps to the taskbar so they always show up whether they’re open or not. Just drag an icon from the home screen/app launcher to the taskbar. 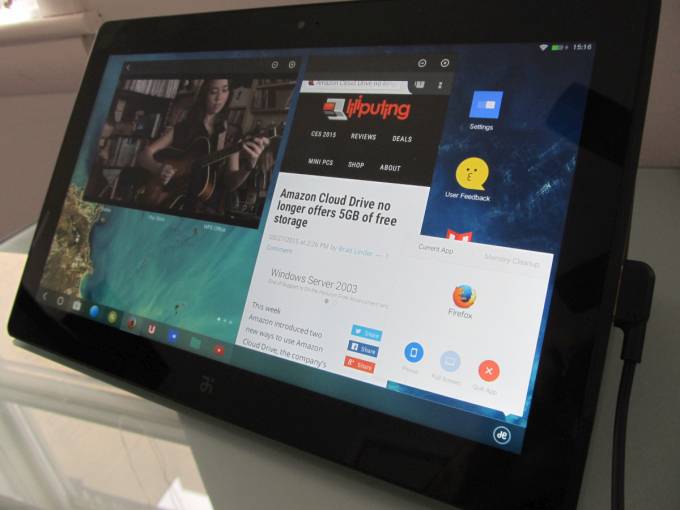 Want to close a running app? You can drag its icon out of the taskbar, tap the x icon at the top of the app window (there’s also a minimize button), or hit the Jide logo on the right side of the taskbar to bring up a menu with a “Quit App” option.

Other options in that menu include “Phone” and “Full Screen.” Some apps only support one mode or the other — and many of the apps that come pre-loaded on the tablet fall into that category. So it took me a little while to find resizable apps.

But after a little experimentation, I found that I can switch between phone and full screen mode in the Firefox web browser, Google’s YouTube app, several office apps (including Google Docs), Amazon’s Kindle app, and more.

Apps in phone mode are resized to look like they’re running on phones… and that means you can fit 3 or more apps side-by-side in landscape mode. But it also means that some apps don’t really have enough space to be useful: Marvel’s Comics Unlimited app works in phone mode, but the speech bubbles are too small to read. 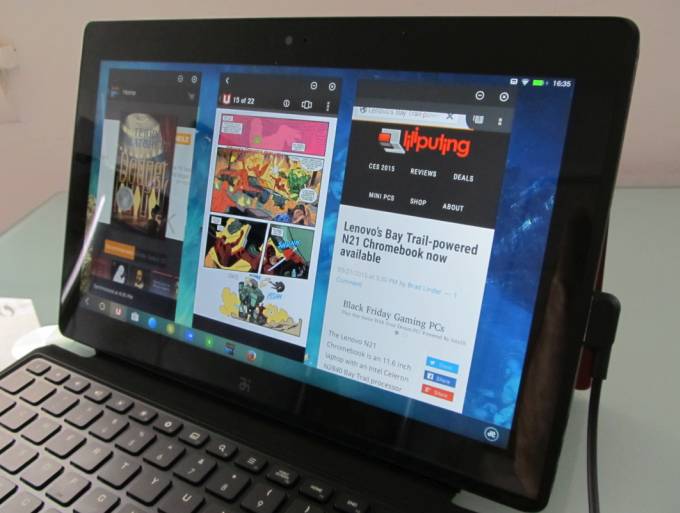 Clearly this feature makes more sense for some apps than others. For example, you could watch a YouTube video in one window while surfing the web or chatting with a friend in another.

Generally speaking, Remix OS lets you do just about anything you could do with a normal tablet, but it adds support for Windows-like multitasking.

But this isn’t a Windows device. The apps aren’t resizable. There’s no support for legacy Windows applications. And under the hood the system is running Android which means that even if you install Firefox, Microsoft Office, or other software you might run on Windows, you’ll be using the Android versions of those apps which might include different features.

There are also some quirks that might need to be worked out: for example when I loaded the game Taichi Panda, I found that the taskbar wouldn’t disappear during gameplay. This means you could accidentally bump the taskbar and open other apps or close the game while playing. 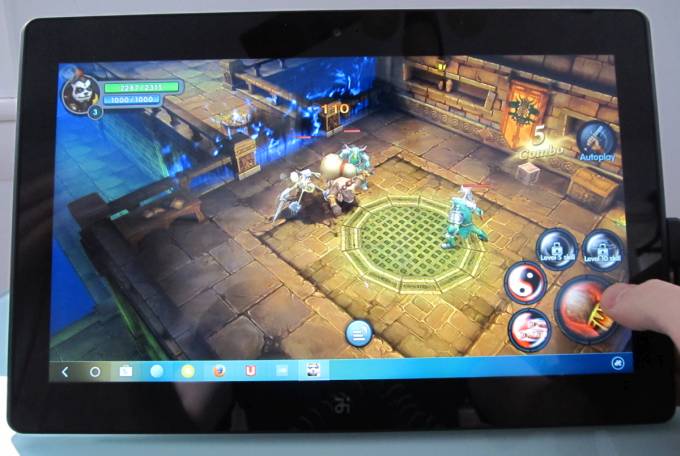 Taichi Panda also doesn’t seem to support screen rotation… which is a problem because if you’re holding the tablet in your hands and using your thumbs to play the game, then your palms are probably blocking the speakers which are on the tablet’s sides.

Normally the speakers sound great, but place your hands over them and the audio can be muffled. This isn’t a problem with most games or apps since you can just flip the tablet over so the speakers are on the top of the device instead of the bottom, but apps that don’t like to auto-rotate can be a problem. 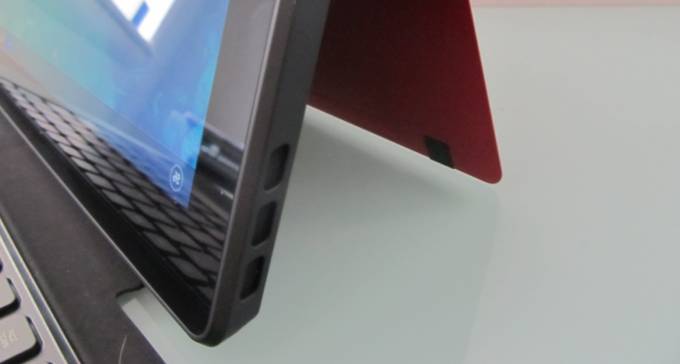 Jide originally developed a version of the tablet for sale in China, but the company is working to get it ready for launch in the United States. But I haven’t encountered many rough edges yet. The Google Pinyin Input keyboard was the default keyboard when I first used the tablet, but after changing the default keyboard to the standard Google keyboard I haven’t found myself accidentally entering Chinese text instead of English.

Overall the tablet feels like a premium device which delivers (somewhat) on the promise of letting you access thousands of Android apps while using Windows-like multitasking. 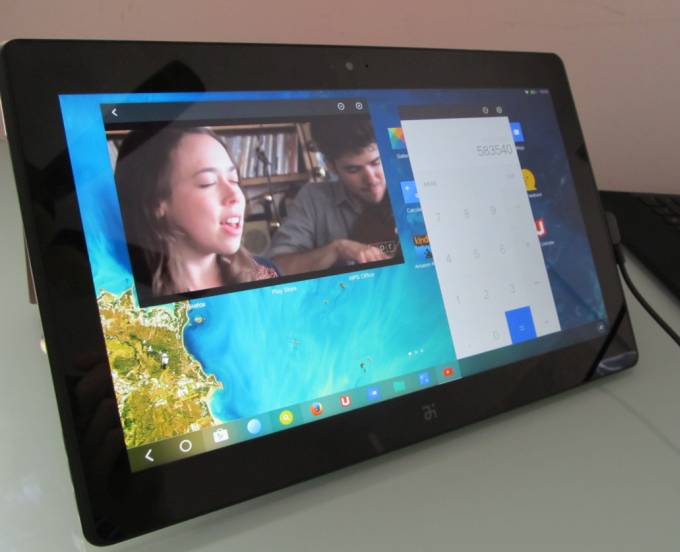 Bear in mind that Android still handles memory management a little differently than Windows though — so when you minimize an app you’re not currently using and then come back to it later there’s a chance that it’ll reload. That can be a problem if you were using a web app, for instance, to watch a video or compose text because you might lose your place when the page refreshes.

On the other hand, Android does supports many tablet-friendly apps and games that aren’t available for Windows and I think it does a better job of handling the transition between laptop and tablet modes than Windows 8.1. If you’ve got the keyboard attached, it’s the default text-input method. Tapping a text-entry box on the screen won’t bring up an on-screen keyboard on the Remix tablet the way it would on a Windows device. 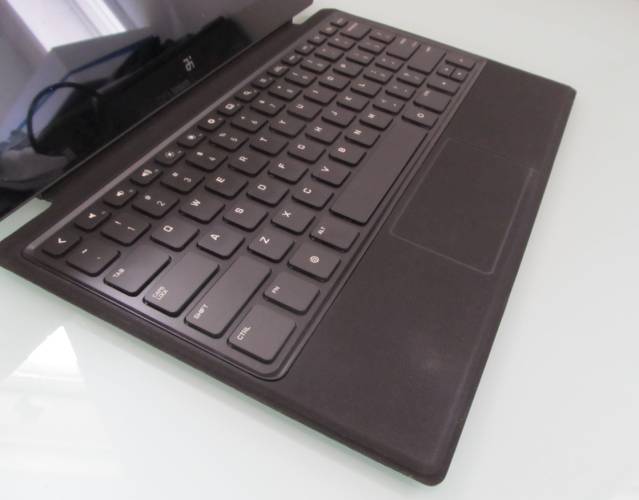 The Remix Ultra Tablet also feels like a surprisingly premium device given its expected $399 street price. The magnetic latches for the charger and keyboard are nice touches, the keyboard is so nice that I’d go as far as to say it’s actually fun to type on (if you’re into that sort of thing), and the kickstand is so useful with or without the keyboard that I’m finding myself wondering why more tablets don’t have one. 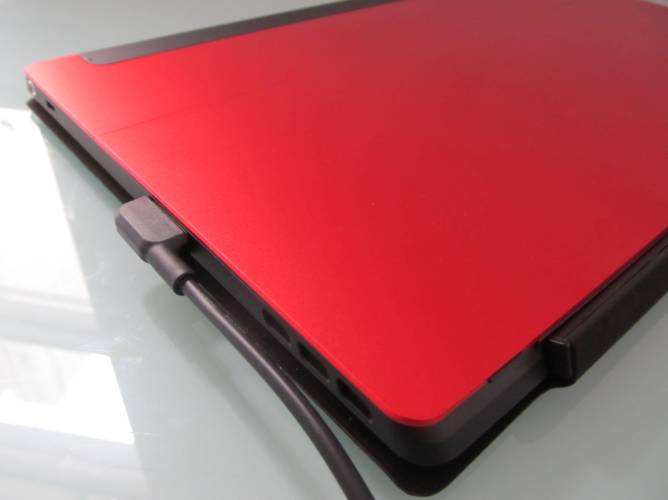 On the other hand, while the tablet’s 2GB of RAM, 64GB of storage, and 1080p IPS display are decent features, the NVIDIA Tegra 4 processor is about two generations behind the times and WiFi tops out at 802.11n speeds instead of the faster 802.11ac standard.

Those aren’t huge problems. The Jide Remix Ultra Tablet can handle games, HD videos, and other tasks. But it can feel a tiny bit sluggish when loading some apps or switching between tasks.

I’m going to hang onto this tablet for a little while and may have additional thoughts to share as Jide continues to update the software. So let’s call this a preview rather than a review.

For now, have some more pictures.