Since the launch of the original Raspberry Pi, there’s been no shortage of cheap, single-board computers aimed at makers and developers. Many take a page out of the Raspberry Pi playbook by offering low-power ARM-based chips, while a few models sport Intel processors.

The JaguarBoard is a new model that falls into the latter camp. It’s a $65 computer-on-a-module with an Intel Atom Z3735G Bay Trail processor.

The developers of the JaguarBoard are running a Kickstarter campaign that ends on January 22nd and hope to begin sending out units to backers of the campaign by the end of the month. 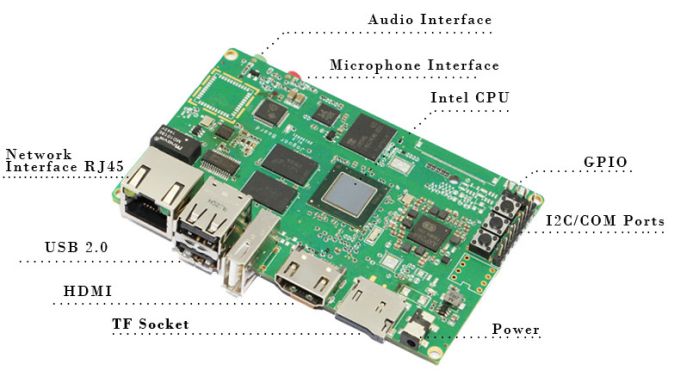 A pledge of $65 ore more is enough to reserve a JaguarBoard with 1GB of RAM, and 16GB of eMMC storage. The computer also features an HDMI port, a 10/100 Ethernet port, three USB 2.0 ports, an SD card reader, a 3.5mm audio jack, I2C, COM, and GPIO connectors.

As far as Intel-based computers go, this model isn’t exactly a speed demon. But it’s cheap and tiny, measuring just 4 inches by 2.5 inches, and it’s a relatively versatile system that should be able to support Windows 10 and Android as well as Ubuntu, Fedora, or other GNU/Linux operating systems.

You could theoretically use it a a general purpose PC or media center system… but you’d probably be better off getting a computer with a little more RAM if you wanted to do that. It probably makes more sense to use the JaguarBoard for less resource-intensive tasks, which is why it’s really targeted at developers and DIY-minded folks.

Or if you’ve got a little more money to spare, you could opt for an UP or LattePanda single-board computer. Both models have Intel Atom x5-Z8300 Cherry Trail processors and options for more memory and RAM than you’d get with a JaguarBoard… although they also cost more.