If you have a recent Android phone, odds are you have a microUSB cable you can use to connect it to a PC to charge your phone and transfer files. The J5 Create Android Mirror JUC600 is a cable that does that… but it also lets you mirror your Android display on your PC>

That means you can view Android apps on a larger screen and play games, send text messages, or do just about any other Android activity on a notebook or desktop PC. 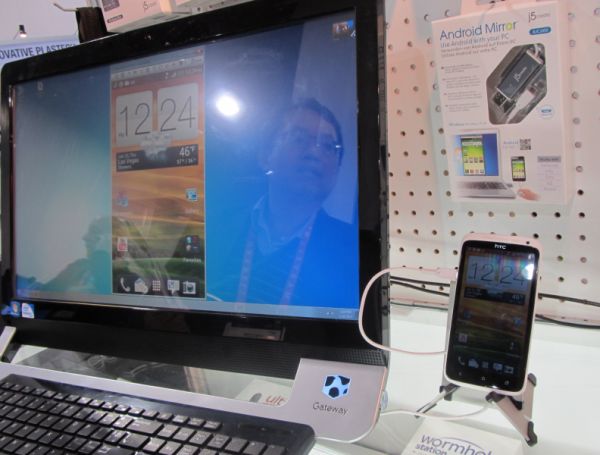 You can either use a keyboard and mouse to interact with Android using the window on your PC, or just pick up your phone and use it normally — everything you do on your phone will be mirrored on the big screen, and vice versa.

There is one problem: there’s enough lag to make watching videos or playing games possible, but not exactly perfect.

I was able to play a few rounds of Angry Birds and Cut The Rope in a demo, but the graphics definitely weren’t running at 30 frames per second. I suspect games where reaction time is even more important, such as first-person shooters would be even more problematic.

The software all comes preloaded on a stick connected to the USB cable, so there’s nothing to install. But you’ll need a device running Android 3.1 or later, and a computer running Windows XP or later.

J5 Create says the Android Mirror has a suggested retail price of about $50, but it’s already available for purchase for as little as $32

Unfortunately, according to at least one v Amazon reviewer, the Android Mirror appears not to work with phones that have been rooted.