One of the things that has long separated desktop operating systems such as Windows and OS X from mobile platforms such as iOS and Android has been the ability to view multiple apps on a display at once. But a growing number of Android developers are bringing multi-window support to Google’s operating system.

Samsung’s latest devices allow some apps to run in small windows. Chinese chip maker Rockchip offers a solution that lets you run apps in small windows, move them around, and resize them. And now a company called Ixonos is offering something similar. 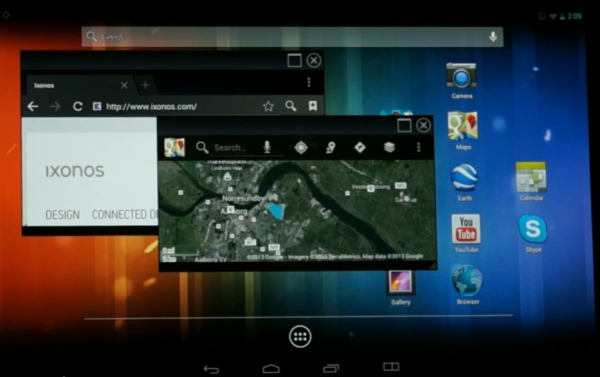 Android apps normally take up all of your screen space, whether you’re using a phone, tablet, TV, or other device. But the Ixonos Multi Window Solution adds Windows-like buttons that you can tap to maximize, minimize, and resize windows.

You can then drag and drop them around your screen, which means you can run two or more apps side-by-side or arrange them any other way you’d like.

Unlike the Rockchip system, which lets you resize windows using pinch-to-zoom gestures, the Ixonos platform really does look like Windows. You have to pull on the corner of a window to resize it, and tap an icon to toggle between full-screen and windowed mode. Given the limited screen real estate on mobile devices, I think I prefer Rockchip’s solution.

With a growing number of apps for editing documents and photos, a huge library of games, and many other productivity apps, Android is starting to look more like a full-fledged operating system that could be all some people need. On the other hand, if you need Windows-only apps like the full versions of Microsoft Office, Adobe Photoshop, or QuickBooks, you might not be able to kick your PC to the curb anytime soon.

Last year Ixonos also showed off a demo of its technology for running Android across multiple displays. For example, you could plug an Android-powered device into two monitors and use one to watch a video and a second to surf the web.