Intel launched its third-generation Core family of processors this week. But all of the new Ivy Bridge chips available at launch are quad-core processors designed for desktop or high-end laptop computers. During yesterday’s launch event, Intel executives said dual-core ultrabook processors would be coming in a few months. 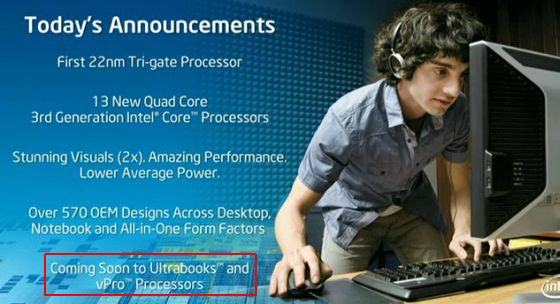 Not surprisingly, June 5th also happens to be the first day of the Computex 2012 trade show in Taiwan. It’s one of the biggest computer trade shows of the year, and it’s a place where PC makers start to show off products that will be available during the second half of the year.

In other words, it’s a pretty good place to launch a thin and light laptop featuring Intel’s latest processors. Ivy Bridge chips are expected to use about 20 percent less power than their predecessors while offering 20 percent better performance. The biggest gains will be in graphics performance, with Intel saying that some computers with Ivy Bridge graphics should be able to play modern 3D video games without a separate graphics card.

Ultrabooks are ultraportable laptops that tend to measure less than 0.7 inches thick, weigh less than 4 pounds, and feature either solid state disks or hard drives with solid state cache for a performance boost. They also all have Intel processors — because Intel trademarked the word ultrabook. If it doesn’t have an Intel CPU it’s not an ultrabook… although AMD has its own plans for the moderate-to-high performance ultralight laptop space.

Interestingly, Windows 8 Release Preview is also due out the first week of June. Laptops, tablets, and other devices preloaded with Windows 8 are expected to be available later this year.