Microsoft, Sony, and Nintendo dominate the console gaming space, and that’s a sentence I probably could have typed at any time in the last decade or two. But every now and then a company decides to try to take them on… sometimes with a cheaper, more accessible alternative and sometimes with a platform that basically slaps custom software on a small gaming PC.

None have really made much of a dent in the console (or Windows PC gaming) market.

But that hasn’t discouraged the folks at Slightly Mad Studios, the developers of popular racing games including Project Cars. Founder Ian Bell has been tweeting for the past week about an upcoming console called the ad Box that he says will be “the most powerful console ever built” when it launches… in three years. 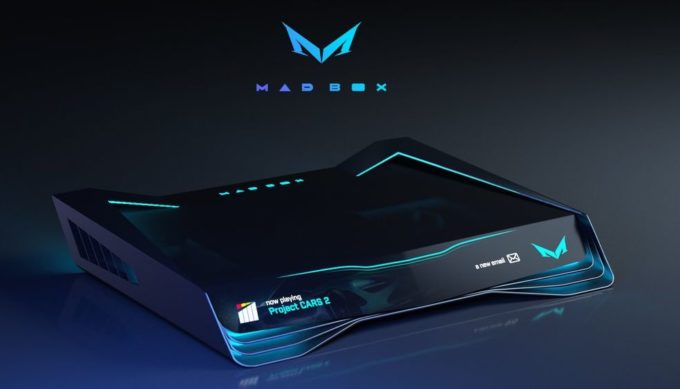 The promise is that it’ll support 4K gaming and virtual reality at 60 fps or higher. But the specs haven’t been finalized. the case design hasn’t been chosen (the images i this post are all concepts Bell shared on Twitter), and even if the company does release a game console more powerful than anything on the market today will it be competitive with next-gen hardware from the big three?

And then there’s the primary reason nobody else has really cracked this space: a game console is only as good as the games it runs.

It costs a lot of money to develop the kind of games that people are willing to buy an expensive console to play. It’s unclear why developers would invest that time and energy into making their games available for the Mad Box.

Bell says Slightly Mad will offer a cross-platform game engine to developers that they can use to export games for PC, Xbox, PlayStation, and the Mad Box with “almost one click.” But the company still has to convince developers to use it.

But maybe there’s another way. Part of the reason Valve’s Steam Machines initiative stalled was that after the company developed a gaming-centric, Linux-based operating system to run on desktop computers… potential buyers quickly realized that most PC games were still Windows-only.

A growing number of developers have started to support Linux… but Windows still has the lion’s share of support from game makers (and gamers… there’s sort of a chicken and egg problem here).

But Valve launched a new tool that lets users run some Windows games on Linux using Steam Play even if the developers never officially added Linux support. It’s not a perfect solution — not every game works. But it did dramatically increase the number of games that are theoretically playable on Linux computers.

So if Slightly Mad can do something similar and ensure that gamers will be able to play titles that haven’t specifically been designed for this console then maybe… just maybe it could sell. But so far that hasn’t really worked for Steam Machines.

Anyway, like the headline says, it’s probably too early to call this product vaporware — at this point it’s really more of an idea and a promise. But I’ll be curious to see whether it goes anywhere in the coming years.

via PC World and Variety