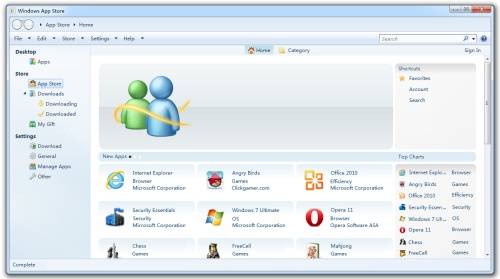 Microsoft has already showed that Windows 8 will offer a radically redesigned user interface meant for tablets and computers with touchscreen displays (although you’ll still be able to use the old-fashioned desktop, taskbar, and start menu view if you like). Now the company is starting to talk about some of the other features coming in Windows 8 on a new blog. One of those features? An App Store.

Anybody that’s been following the progress of Windows 8 for the past few months shouldn’t be shocked to find out that Microsoft is building an app store into the operating system. Rumors of an app store started making the rounds way back in April, although the images that leaked at the time (including the one shown above) may not have been legit.

But this is the first time Microsoft has officially confirmed the project, even if indirectly. It only came up when Microsof’ts Steven Sinofsky posted a list of the different teams working on the upcoming operating system.

I’ve historically been a little skeptical of app stores for desktop operating systems — especially Windows. After all, isn’t the web kind of an app store for Windows? There are thousands, if not millions of places where you can download and install apps that run on Windows computers.

That said, the beauty of app marketplaces for iOS, Android, and other mobile operating systems… and even OS X isn’t just that all the apps are in one place. A good app store also offers user reviews and ratings, links to related apps, descriptions and photos — and in some cases knowledge that a team of professionals has vetted an app to make sure it doesn’t contain malware.

I doubt introduction of an app store for Windows doesn’t mean that users will only be able to install apps from the official store. But it might make finding high quality apps a little easier for folks that don’t want to search far and wide for them.

I’ll also be curious to see whether the Windows 8 App Store is actually called an “App Store” when the operating system and app marketplace go live. Apple has been working pretty hard to protect its trademark on that term.