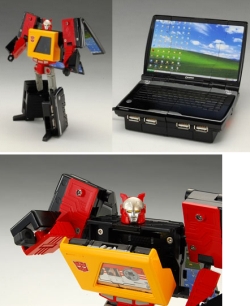 You know what would be really cool? A netbook that could be folded up and “transformed” into a working MP3 player that you could stick in your pocket. Or how about one that could transform into a programmable robot? You know what’s not quite as cool? A USB hub that only looks like a netbook, and which transforms into a toy robot with a cassette deck in its chest.

Still, that’s exactly what one Japanese company is selling for about $42. Because you know you need a cassette deck to play your Paula Abdul tape collection.

On the other hand, I suppose it would be kind of cool in an ironic way to plug a 4-port USB hub that looks like a netbook into your netbook.

Update: Engadget points out that the cassette deck doesn’t work any better than the fake computer.

via Gizmodo and Craziest Gadgets