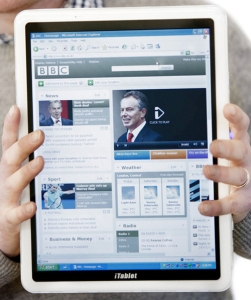 Sure, Apple may have decided to name its upcoming tablet the iPad, rather than the iSlate, iTablet, or any of the other rumored names that were floating around. But it takes some guts to name your rival tablet PC the iTablet. Apparently UK company X2 doesn’t lack anything in the guts department, because that’s exactly what they did.

The iTablet sports a 1.6GHz Intel processor (I’m guessing Atom), a 250GB hard drive, Bluetooth, and 3G. It has 3 USB ports, a 1.3MP webcam, and HDMI output, which either means I’m wrong about the Atom CPU or this device uses an Atom Z5xx series processor, NVIDIA IOn graphics, or a Broadcom Crystal HD video accelerator.The device will reportedly run Windows 7, but the image clearly shows a prototype running Windows XP.

The tablet will come in two sizes. One will have a 10.2 inch display, while the other has a 12.1 inch screen. Both models will measure about 1.4 inches thick, which makes the iTablet almost 3 times fatter than the iPad.

No word on pricing yet, but the iTablet is due out in April.

via Gizmodo and Electric Pig

9 replies on “iTablet: Web tablet from X2 that runs Windows”