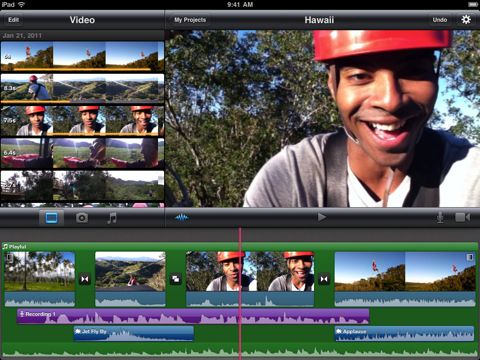 For the last few years I’ve been hearing people complain that while tablets are great for content consumption, they’re no good for content creation due to their slow processors and the lack of physical keyboards. But time and again developers have been proving us wrong by coming up with new and interesting ways for smartphone and tablet users to create and share content with these mobile devices.

It turns out there’s more than one way to produce something new and original. I’d rather have a full sized QWERTY keyboard than anything else when it comes to writing emails, blog posts, or… well, that’s most of what I write. But the case isn’t nearly as cut and dry when it comes to shooting and editing photos and videos or creating original music compositions.

I wouldn’t even think of using my laptop’s webcam to shoot an unboxing or video review for this site. Instead I typically rely on a Canon PowerShot camera to shoot the video, and then I copy the file from the SD card to a PC for editing, transcoding, and uploading to YouTube. But I’ve also used my iPod touch to do the same thing. The difference is I can shoot, edit, and upload the video all from my iPod touch. It has a 720p HD video recorder, a $4.99 iMovie app for making simple edits, and it will automatically transcode the app to reduce the file size before uploading it to YouTube. The process is actually a lot simpler and faster than using a camera and computer — the only reason I don’t do it more often is because my camera produce slightly higher quality images and video.

But surely, you’d think that a computer with a high performance multi-core processor would at least be faster at CPU-intensive tasks such as transcoding a video, right? Not necessarily.

The folks at AppAdvice noticed that the iPad 2 is actually faster than almost any Mac computer when it comes to transcoding H.264 video files shot on a 4th generation iPod touch. That’s when running the mobile iMovie app on the iPad or the full version on the Mac computers. While the iPad 2 was the king of the hill with pure transcoding jobs, high-end Mac machines were a little faster when it came to rendering videos with added titles, images, and music. But they weren’t that much faster.

Does that mean Apple’s new A5 processor is almost as fast as a multi-core Intel chip? Not necessarily. It’s just that the A5 chip has integrated support for transcoding H.264 videos, and the iMovie app for iOS is designed specifically to take advantage of the hardware on iOS devices.

That said, do you really care why the iPad 2 is so fast at performing tasks such as video rendering and transcoding? I’m just impressed that Apple has optimized its hardware and software so that you really can get some real work done on a mobile device — provided you’re interested in shooting and editing video rather than, say, writing out the great American novel using the iPad’s on-screen keyboard.

We’ve also seen plenty of instances of people using iPads and other tablets to create and edit music, photos, and other digital media, and Apple has join in the action with the launch of new Garage Band and iPhoto apps for the platform.

This doesn’t mean that notebook and desktop computers are on the way out anytime soon. But you need the proper tools for any job, and it turns out that despite early claims that “content creation” required a more traditional PC, it’s becoming clear that’s not always true.