Update: It turns out this article was based on faulty evidence. Chrome Unboxed saw the Open with Windows Application option because they had Crossover installed on their Pixelbook.

While it’s already possible to use Crossover or WINE to run Windows apps on some Chromebooks that support Android apps, there’s currently no evidence that Google is planning to bring native support for the feature to Chrome OS.

The original article continues below (with the text stricken out). I was going to delete it, but I didn’t want to delete all of the associated comments. 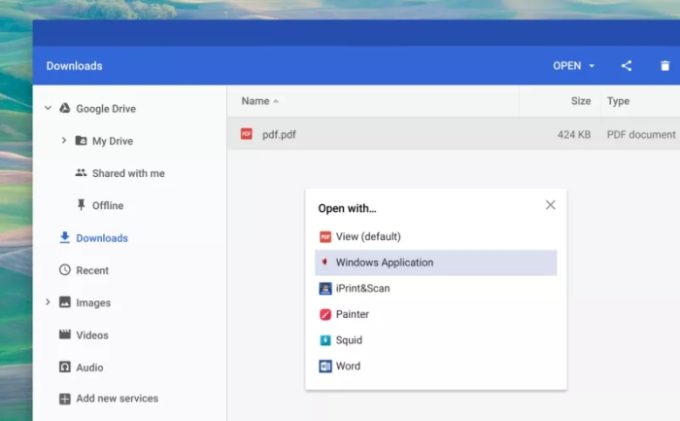 As pointed out by Chrome Unboxed, it looks like parts of the framework are already up and running on Google’s Pixelbook. If you right-click on any DOC, PDF, or other document file and click “open with,” one of the options you’ll see is “Windows Application.”

But how am I supposed to install a Windows application on a Chromebook? The icon next to the text provides a clue: it’s a wine glass. More specifically, it’s the logo for the WINE project.

So far all you’ll see is the “open with” dialog box. You can’t actually open documents with a Windows application. But it sure looks like Google is working on a way to let you do just that.

Based on what we know about Crostini and WINE so far, here’s how it would probably work:

While it’s not surprising that WINE works in Crostini, I am a little surprised to see Google add “Windows Applications” to the open with context menu. It suggests this could be a feature that’s built directly into future versions of Chrome OS, allowing users to run all sorts of apps on a Chromebook, including:

Pretty much the only thing missing are iOS and macOS apps.

Oh, and storage space. There are probably a few reasons these features are showing up first on Google’s Pixelbook. First, it’s a Google product, so of course it’s what the company’s developers are testing new software on.

But second, it’s one of the most powerful Chromebooks available, with 7th-gen Intel Core i5 or Core i7 processor options, 8GB to 16GB of RAM, and 128GB to 512GB of storage.

In other words, it has plenty of space for a lot of documents, files, and programs.

Up until recently, one of the key selling points of Chrome OS was that it was a lightweight, cloud-centric operating system that didn’t require a lot of local storage. That allowed PC makers to sell dirt-cheap Chromebooks with as little as 16GB of built-in storage. That’s fine for a device that’s mostly used for web browsing, but it doesn’t seem like nearly enough space for a computer that can run Android, Linux, and Windows applications.

I don’t know if Google will only offer Crostini/Linux/Windows app support on high-end Chromebooks that meet minimum speed, RAM, and storage baselines. But I wouldn’t be surprised if we start to see a lot more Chrome OS devices shipping with more than 16GB of storage.

Google’s annual developer conference begins May 8th. There’s a good chance Google will have something to say about Crostini and the future of Chrome OS during this year’s Google I/O.

9 replies on “Update: Nope (It sure looks like Chromebooks will support some Windows apps soon)”