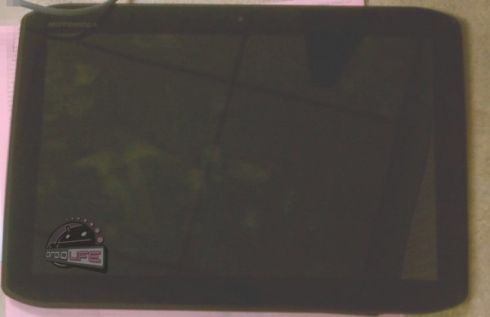 When Motorola launched the XOOM tablet in February, it was the first 10 inch Android tablet to feature Google Android 3.0 Honeycomb. That, in turn, was the first version of Android to be optimized for tablets with larger-than-smartphone displays. But in the months since then, the market has become flooded with similar devices from Acer, Asus, Lenovo, Samsung, and others. It’s not hard to find a 10 inch Honeycomb tablet with an NVIDIA Tegra 2 dual core processor and 1280 x 800 pixel display these days.

So what does Motorola have in store for act 2? It’s a bit early to say for certain, but the folks at Droid Life have snagged a few photos of a device they believe may be the next tablet from Motorola. It may be called the XOOM 2 and it may have the model number MZ617.

At first glance, the XOOM 2 looks a lot like the XOOM 1. It’s mostly screen with a little black bezel and there are cameras on the front and the back. The key difference appears to be the absence of rounded corners. The XOOM 2 appears to have sharper angles around the edges — or maybe that’s just a Photoshop job by someone trying to make an original XOOM look like a new device.

There’s no information on the actual specs for the new product yet, so aside from the new edges we don’t really know much about the device. It’d be nice if it had a faster processor such as the upcoming NVIDIA Kal-El chip, or the latest Samsung, TI, or Qualcomm chips. But we’ll probably have to wait for Motorola to actually announce the product before we know for certain.

Update: The Verge reports that the new tablet will have a 1.2 GHz dual core processor, faster RAM, and a thinner case, measuring just 9mm thick (barely any thicker than the iPad 2). The Xoom 2 will also reportedly get 11 hours of battery life, be able to record 1080p HD video, and feature an IR port allowing you to use it as a remote control, among other new features.

Update the second:  The Verge also received a tip that Motorola may be working on another new tablet called the XOOM 2 Media Edition, which features an 8.2 inch HD display and weighs about 0.95 pounds. It will reportedly be easy to hold in one hand, and will also offer an IR remote and subwoofer for media playback.

Update the third: Oh look, Engadget has some more photos.