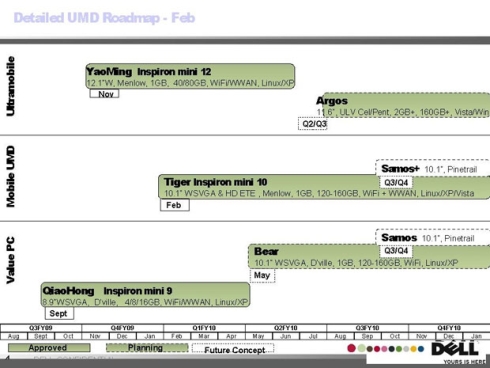 Dell may be preparing to phase out the Inspiron Mini 12. The Mini 12 was arguably the first mini-notebook to blur the line between a netbook and full sized notebook. Like a typical netbook, it sports a low power Intel Atom CPU and a low price tag. But it has a 12 inch, 1280 x 800 pixel display making it larger than most netbooks.

Last week Dell announced that it’s 9 inch Inspiron Mini 9 had reached its end of life. Now APC Magazine reports that the Mini 12 is quickly following suite. The Inspiron Mini 12 has been pulled down from the company’s Australian web site. While it’s still available from the US store right now, the computer is also missing from the UK, Hong Kong, and Singapore stores, which seems to be in keeping with a product roadmap that was leaked to the press earlier this year.

That same roadmap indicates that we should see an 11.6 inch laptop with a CULV processor from Dell soon.

The Dell Inspiron Mini 12 had a low power Intel Atom Z5xx series CPU, GMA 500 graphics, and wasn’t exactly known as a speed demon. But it was one of the first 11-12 inch laptops with an Atom processor, and you could make the case that it led other computer makers to follow suit expanding the definition of a netbook. What do you think? Will you miss the Mini 12? Did you ever own one? Let us know about it in the comments.

9 replies on “Is the Dell Inspiron Mini 12 on its way out, and will anybody notice?”