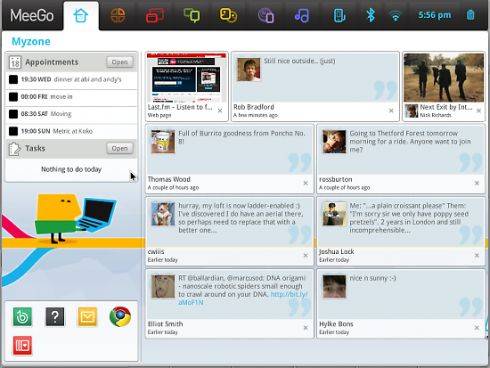 MeeGo is a Linux-based operating system optimized to run on low power devices with small screens including smartphones, tablets, and netbooks. The project is backed by Intel, and up until recently Nokia was a big player on the MeeGo scene, but Nokia has pretty much given up on MeeGo and is in the process of switching its smartphone efforts to Windows Phone 7.

Now Digitimes reports that Intel may also be looking to slow down MeeGo development due to lack of interest from hardware makers. Intel representatives say it remains committed to MeeGo, but what exactly do you expect them to say?

On the other hand, if the rumor is true, the timing seems a bit strange. After years without a single manufacturer actually bringing a MeeGo product to market Nokia is getting ready to sell its first (and last) MeeGo phone in select markets. And any day now Asus plans to start selling the Eee PC X101 netbook with MeeGo Linux for as low as $200.

At this point I’d be surprised if Asus simply canceled the netbook, but the company does plan to ship MeeGo and Windows 7 versions. Perhaps if the MeeGo model doesn’t sell well Asus will just phase it out and keep offering the Windows model for a slightly higher price. But I have to wonder whether it makes sense to spend even $200 on a netbook if it turns out that the operating system won’t be adequately supported.

Of course, the X101 could still prove popular wither geeky consumers that are interested in a cheap tinkering platform. After all, plenty of people buy Windows netbooks only to wipe the operating system and replace it with Ubuntu or another Linux-based operating system. Why not buy a machine that doesn’t come with the so-called Windows tax and just replace MeeGo with an operating system of your choice? That’s what people did with the original Eee PC netbooks that shipped with Xandros Linux way back in 2007 and 2008.

This isn’t the first time we’ve heard reports that MeeGo Linux was a dying platform. Earlier this year developer Andrwew Wafaa of the openSUSE Linux distribution said he was going to stop working on a version of openSUSE with MeeGo features after he realized that MeeGo development for netbooks was largely stagnant.