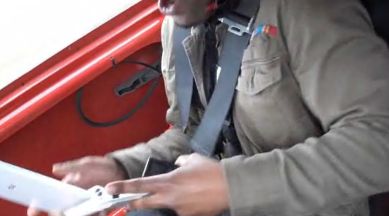 You would think that a computer with a full QWERTY keyboard, even one with tiny keys like the Asus Eee PC 701, would allow you to type faster and more accurately than an iPhone with its touchscreen virtual keyboard. But then you’ve obviously never tried typing while in the back of a rally car racing around a track at full speed.

Crave’s Rory Reid decided to give both devices a try while whooshing around a track, and he found it nearly impossible to hit the correct keys on the Eee PC (It looks like an Eee PC 701, but I can’t tell for certain from the video). But the handheld iPhone was easier to use, especially since it features some auto-correct features.

Long story short, I would expect slightly different results if you were sitting at a quiet desk, or even if you were trying to tap out a complete system. But if you happen to be trying to send short text messages or emails when driving, flying, or skydiving at ridiculous speeds, it looks like you might be better off with a cellphone than a netbook.