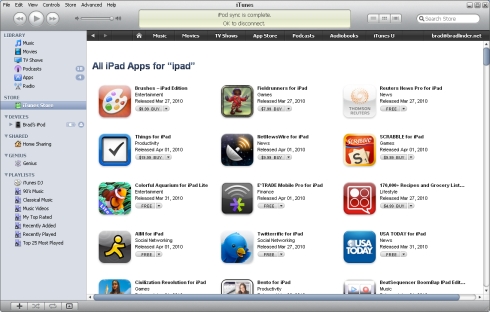 Apple has just let loose the iPad app floodgates. You can now check out the complete list of approved iPad apps in the iTunes app store. While there are a fair number of free aps, just like ther eare for the iPhone and iPod touch, it turns out that paid apps are considerably more expensive than iPhone apps.

While there are thousands of iPhone apps with price tags between $0.99 and $2.99, it looks like developers are hoping you’ll pay a little more money for iPad apps. I haven’t done a complete tally, but it looks like there are just about as many apps selling for $9.99 as $0.99, with plenty of $5 and $6 apps thrown in for good measure. At least one program has a price tag of nearly $20.

That’s not to say that Scrabble, NetNewsWire, Tetris, and other apps aren’t worth $10. It’s just that iPhone users have gotten used to apps being cheap. I guess it’s time to see if they’re willing to pony up for apps designed for a larger display. If not, I suspect we’ll start to see iPad app prices fall soon.

You can check out the list of apps in the iTunes App Store.