Proactive learns from the way you use your phone and automatically offers suggestions depending on your time, place, connected devices, and other details.

Apple is releasing a developer preview of iOS 9 today with a public beta coming in July and a full release later this year. The software will be available for every device that’s capable of running iOS 8.

For instance, if you tend to listen to music while you’re working out at the gym, your phone will know where you are and bring up the music player as soon as you connect your headphones.

Or if you’ve been listening to an audiobook during your daily commute, your iPhone can open the book when you get in your car after work so you can pick up where you left off without having to find the app.

Before you even start a search, iOS 9 also populates the search page with information you might want, including suggestion contacts, nearby locations, and recent news items. 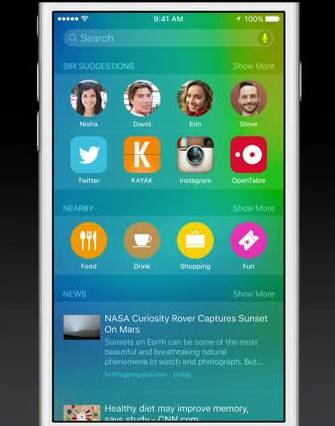 Apple says iOS 9 can also grab information from your device to do some other nifty things. For example if a phone call comes in from a number you don’t recognize, your iPhone can scan your email to see if it’s seen the number before and give you a possible name to go with the number.

Receive an invitation to an event via email? Apple iOS 9 can automatically add events to a calendar and send you a reminder when it’s time to leave for the event.

Worried that this gives Apple access to your private data? Apple says everything happens on your device and nothing is shared to the cloud or shared with third-party apps or services. So while Proactive can look through your email, contacts, and other apps, the information is never sent back to Apple’s servers.

Other new features in iOS 9 include updated Notes and Maps apps (with support for checklists in the former and transit directions in the latter, among other things).

Apple is also introducing a new app called News which provides news from dozens of publications and learns from your reading behavior to show you articles you’re interested in.

News will be available initially in the US, UK, and Australia.